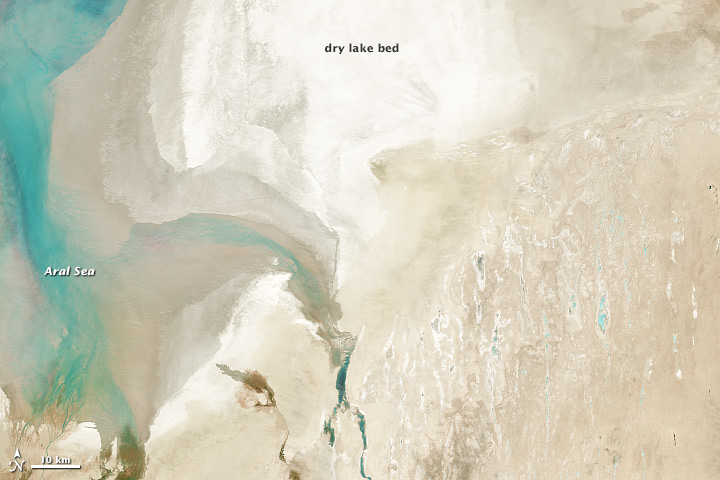 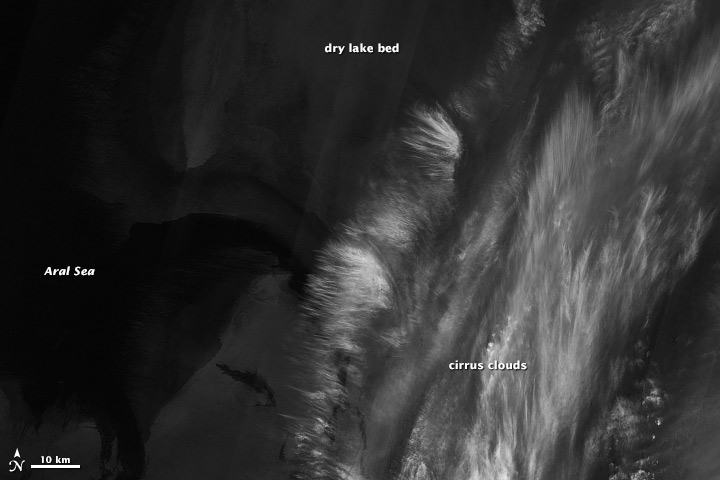 For decades, Landsat satellites have documented the desiccation of the Aral Sea in Central Asia. Once one of the largest inland seas in the world, it shrank to a tenth of its original size after the former Soviet Union diverted its feeder rivers in the 1960s. Scientists studying the changing ecology and retreating shoreline of the Aral Sea have long relied upon Landsat for perspective. Thanks to a feature on the newest Landsat satellite—the Landsat Data Continuity Mission (LDCM)—scientists will get a clearer and more consistent view.

One of the spectral bands on LDCM’s Operational Land Imager (OLI) can identify high-altitude, wispy cirrus clouds that are not otherwise apparent in other bands. For example, the natural-color image of the Aral Sea (top) from March 24, 2013, appears to have been taken on a relatively clear day. But when viewed in the cirrus-detecting band (lower image), bright white clouds appear. (Turn on the image comparison tool to see the difference.)

“Cirrus clouds pop out,” said Pat Scaramuzza, a senior scientist with the U.S. Geological Survey. “Cirrus clouds can be so thin that they won’t be visible in a typical image. But the cirrus band will see it and it will tell users: ‘There’s a thin cloud layer and it can affect your results.’”

All of the Landsat satellites detect different wavelengths of light reflected off Earth’s surface, and clouds can sometimes obscure the view. Because of this, scientists will often disregard images or pixels gathered on cloudy days. That’s easy to do when big, puffy cumulus clouds appear like popcorn strewn across a landscape. But it is harder when thin, almost transparent cirrus clouds move in.

To identify cirrus-covered areas, OLI has detectors for a specific wavelength of light (1.38 microns) that bounces off of the ice crystals in the high-altitude clouds but is absorbed by water vapor closer to the ground. “Cirrus clouds are composed of ice crystals, so at this wavelength they are reflecting sunlight very high up in the atmosphere,” said Lawrence Ong, a research scientist with NASA’s Goddard Space Flight Center. “Below that, the energy is being absorbed by the water vapor in the air.”

The point of the cirrus band is to alert Landsat users to the presence of cirrus clouds so they know that the data in the pixels under the clouds could be slightly askew. Scientists could then use images taken on a cloud-free day, or they could correct the data from the other spectral bands to account for the cirrus clouds.

LDCM, the newest spacecraft in the Landsat family, was launched on Feb. 11, 2013. When the on-orbit calibration and checkout phase of LDCM is over (scheduled for late May 2013), the satellite will be renamed Landsat 8 and handed over for operation by the U.S. Geological Survey.