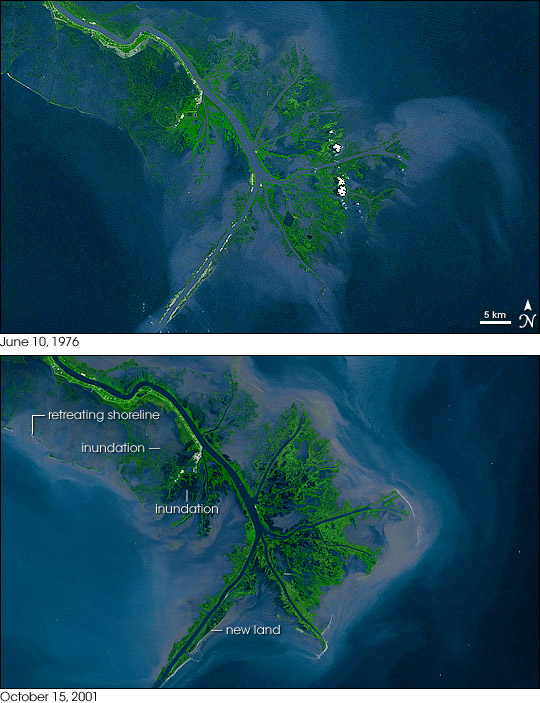 Time, weather, and human intervention have all shaped the Mississippi Delta in Louisiana, a giant bird’s foot shape protruding into the Gulf of Mexico. The Mississippi River deposits sediment into the ocean, and over 25 years, NASA Landsat satellites observed changes in the delta’s shape. On June 10, 1976, Landsat 1 acquired the top image. On October 10, 2001, Landsat 7 acquired the bottom image. In the years that separated these acquisitions, the river delta saw retreating shorelines, inundations, and some additional new land.

In the 2001 image, new land appears most conspicuously along the southwestern tip of the delta, on the southeast side of the waterway. Upstream, inundations appear along the river, where water has overflowed the riverbanks. The shoreline has also retreated south of the river. The 2001 image shows darker water in the river channel and more obvious brown sediments around the delta, but these differences may result as much from the enhanced imaging abilities of a newer sensor as from changes in the waterway.

Left to their own devices, rivers change course over time, and the Mississippi is no exception. Geologists surmise that the Mississippi changed course numerous times over the past 10,000 years, wandering across a roughly 320-kilometer (200-mile) range along the Gulf Coast. The Mississippi probably settled on its current course some six centuries ago. Permanent human settlements created a strong desire to manage the river’s behavior and end its meanderings. The U.S. Army Corps of Engineers constructed dams, locks, and canals to keep the river on one course.

In the aftermath of the Hurricane Katrina, arguments intensified that the human management of the Mississippi River was a mixed blessing. The sediments the river carried offset the area’s subsidence, or sinking to a lower elevation. Placement of dams, however, stopped the sediment deposition, and also led to the loss of marshlands. Had coastal wetlands been present during Katrina and other hurricanes, they may have acted as a buffer against flooding by slowing the storm’s giant waves and absorbing the surge of water that swept ashore with the hurricane.