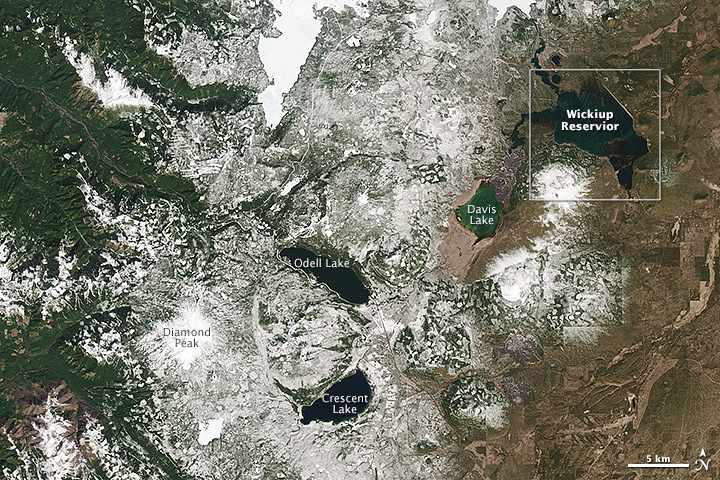 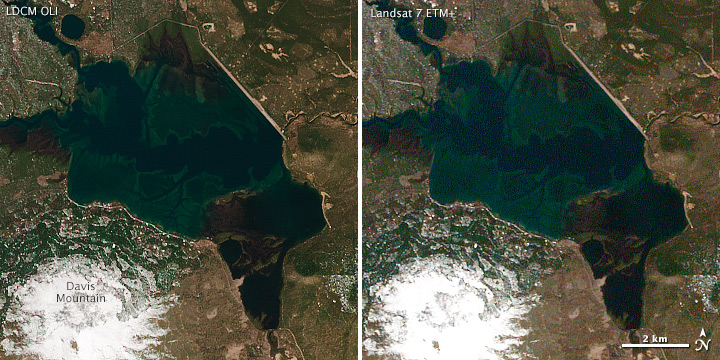 A Dynamic Landscape, a Dynamic Sensor

The newest Landsat satellite—the Landsat Data Continuity Mission (LDCM)—is especially adroit at providing meaningful information across a broad range of landscapes. A patchwork of national forests in the Cascade Mountains of the Pacific Northwest of North America provides a great test for the eyesight of the new satellite because the area has such a wide dynamic range of colors, topography, and brightness (or reflectance).

The Operational Land Imager (OLI) on LDCM acquired the top image above on March 30, 2013. It shows portions of the Willamette and Deschutes National Forests, in an area about 40 miles southwest of Bend, Oregon, and 50 miles north of Crater Lake. In this natural-color image, the deep, dark hues of Odell and Crescent Lakes and Willamette’s Douglas-fir forests contrast with the bright mountaintop snows and the arid dirt and rock to the east.

The lower, side-by-side image comparison shows a subsection of the large OLI image (left) as well as data collected by the Enhanced Thematic Mapper Plus (ETM+) on Landsat 7 on the same day. In order to achieve greater sensitivity to brightness and color, the OLI instrument on LDCM (as well as the Thermal Infrared Sensor) was designed to produce 12-bit data. The previous generation of sensor, ETM+, gathers 8-bit data. This means that instead of trying to describe every pixel from the brightest to the darkest with 256 data values, OLI uses 4,096 values to digitize its signal, which is less noisy over a wider range.

The practical effect of this refinement is apparent when comparing the OLI and ETM+ images of Davis Mountain (bright) and Wickiup Reservoir (dark). In the OLI view (open the large image file), OLI shows more nuanced details in the rocks and shadows on the 6,825-foot-tall Davis Mountain. Similarly, the shoreline and marshlands of the shallow Wickiup Reservoir are more easily discerned.

During a four-day period from March 29 to April 1, 2013, LDCM flew on the same orbital path but a few miles under Landsat 7. This under-flight allowed the two satellites to collect data in tandem over the same landscapes at the same time. With nearly identical atmospheric and solar illumination conditions, LDCM researchers now have a strong data set for comparisons and calibrations of imagery between the two satellites, extending the 41-year record of land observations.