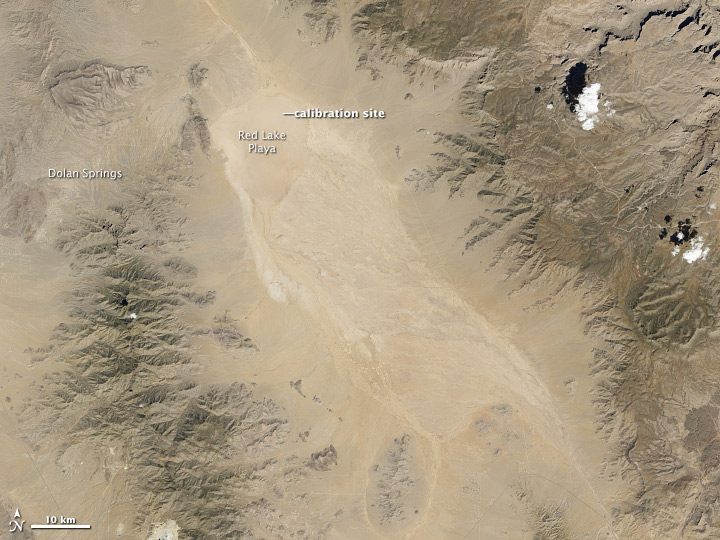 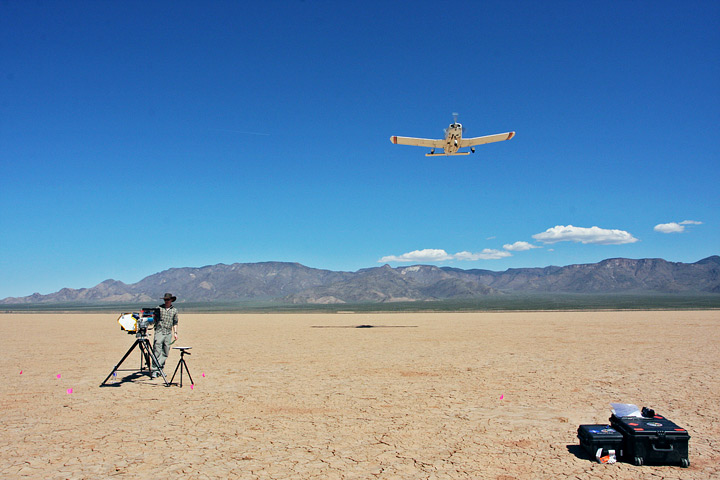 Eye Exam for a Satellite

You don’t just strap a satellite to a rocket, launch it, and voilà, it takes measurements. Beyond maneuvering into the right orbit, there are a series of check-out procedures to make sure the satellite performs in space as it did in ground tests. You have to make sure the communication signals are strong and clear. You have to exercise moving parts like shutters and doors. You have make sure the solar panels are oriented to the Sun and batteries and thrusters are working properly.

For a satellite designed to take images—such as the Landsat Data Continuity Mission (LDCM)—a critical step is calibration, both at the beginning of the mission and throughout its lifetime. There are many steps to calibration, but a key one is determining whether the observations of light and color reflected by Earth’s surface match what can be observed with instruments and eyes on the ground. And since LDCM is the eighth satellite in a long line of Earth observers, calibration also involves matching new observations with how the previous satellites saw things.

The natural-color satellite image above was captured by the Operational Land Imager on LDCM on March 29, 2013. The scene includes a dry lake bed in the Arizona desert known as Red Lake Playa. On the day of the satellite image, researchers took measurements with instruments on the ground and from an airplane (second image) while LDCM took measurements from about 700 kilometers (500 miles) overhead. LDCM flew on the same orbital path (but slightly lower altitude) as the Landsat 7 satellite, which has been making observations since 1999. The two satellites took coincident measurements from March 29–31, collecting more than 1,000 common scenes.

Like the charge-coupled device on your digital camera, OLI turns measurements of light reflected by Earth’s surface into voltages that can be digitally stored and transmitted. Researchers compare those measurements with what was observed on the ground, making small adjustments that are similar to adjusting the brightness on a digital photograph. It is important for instrument performance to be consistent across different generations; if not, differences between the images could be misunderstood as changes in the landscape. This means the LDCM team must not only make sure the satellite compares well with previous Landsats, but they must also re-evaluate old images as new technologies improve the accuracy of the view.

The playa in Arizona—not far from the towns of Dolan Springs (left) and Kingman (not in view)—was chosen for the calibration activity because it is remote, sparsely vegetated, high altitude, and flat. “We like to use bright, uniform and level sites, often in the southwestern United States” said Brian Markham, the leader of the LDCM calibration team and a scientist at NASA’s Goddard Space Flight Center. Such features assure that there is less distortion of the signal by moisture, clouds, and pollution in the atmosphere. Such areas also tend to change little over time, making them ideal for calibrating instruments over several generations.

In the photo, NASA Goddard scientist Joel McCorkel is operating the Solar and Lunar for Absolute Reflectance Imaging Spectrometer (SOLARIS), a portable instrument to observe the properties of light reflected by the land surface. The plane is carrying the Goddard Lidar, Hyperspectral, and Thermal (G-LiHT) instrument, a portable imaging system that maps the composition, structure, and function of terrestrial ecosystems. “The lidar provides 3D information about the distribution of foliage and canopy elements,” said Bruce Cook, also from Goddard. “Imaging spectroscopy helps discern species composition and variations in biophysical variables. And the thermal measurements quantify surface temperatures and detect heat and moisture stress.”

“These measurements transfer the advanced laser-based calibration from the lab to the test site and finally to the new and old Landsat sensors,” said McCorkel. “The ground and airborne instruments used during this campaign measured light in hundreds of separate spectral (color) channels. This means that effects of differences between the new and old Landsat sensors can be studied in greater detail.”