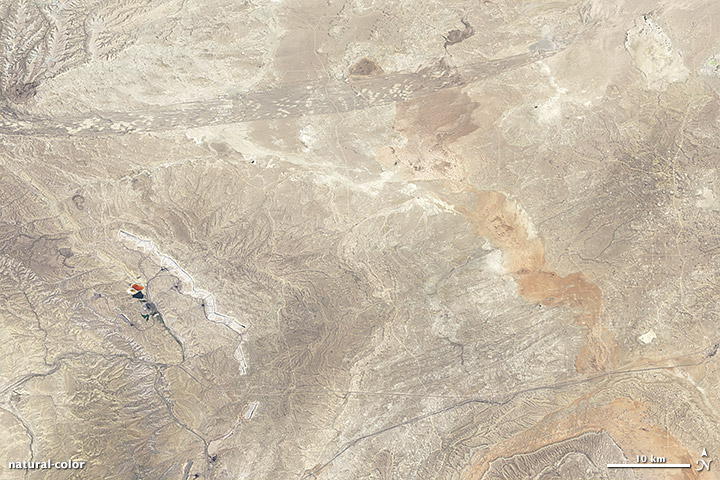 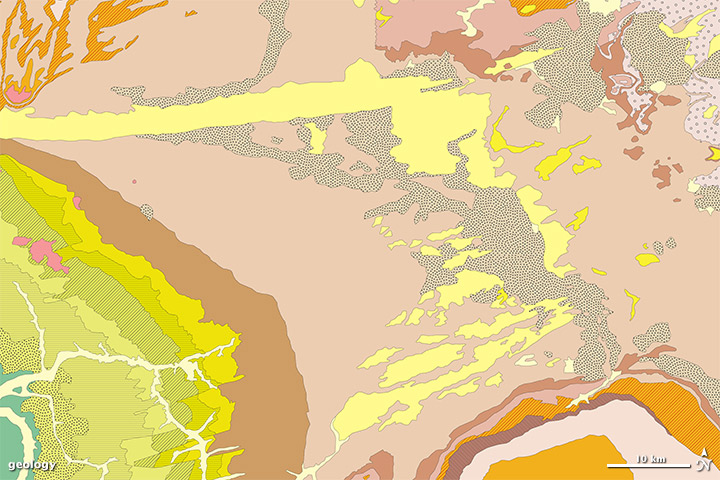 Satellites can’t see fossils, but satellite images can help computers and scientists predict where fossils are likely to be found. The key is to accurately identify the land cover, including the kinds of rocks that are usually fossil rich. Robert Anemone and Charles “Jay” Emerson of Western Michigan University have tapped the potential of satellite sensors and computers to look for fossils, and recently tested their efforts in Wyoming’s Great Divide Basin.

The images above provide two views of part of the Great Divide Basin. The top image is made from observations by the Enhanced Thematic Mapper Plus (ETM+) on the Landsat 7 satellite. The bottom image is part of the Geologic Map of Wyoming, which was compiled from ground-based observations. (A legend explains the rock types.)

Over millions of years, the landscape can change dramatically. For example, areas that are arid today may have once been at the bottom of a shallow sea, or part of a network of rivers and lakes. A parcel of land may once have been located in an entirely different part of the globe. Many of those ancient landscapes left behind clues in the form of rock layers—sandy or muddy sediments deposited by wind and water that later hardened into rock. Geologic maps show the locations of these ancient formations.

Geologists started mapping rock layers long before satellites flew overhead, but space-based observations can provide a valuable new perspective. In badlands—arid landscapes with sparse vegetation—some geologic features that are invisible or inaccessible from the ground can be seen from the sky. Features in the satellite image above don’t correspond exactly to the formations mapped by geologists, but the outlines generally match.

Both the geologic map and the satellite image show a roughly east-west band (marked in the map in yellow). In the Geologic Map of Wyoming, this band is identified as dune sand and loess deposited during the Quaternary Period—the most recent 2.6 million years of Earth’s history. From the east end of that band, another distinct type of land cover stretches toward the south-southeast (marked by gray-beige with small dots). These deposits of clay, silt, and sand were left by water bodies such as playa lakes.

Maps adapted from the Geologic Map of Wyoming, and Anemone et al., 2011, by Robert Simmon. Caption by Michon Scott.