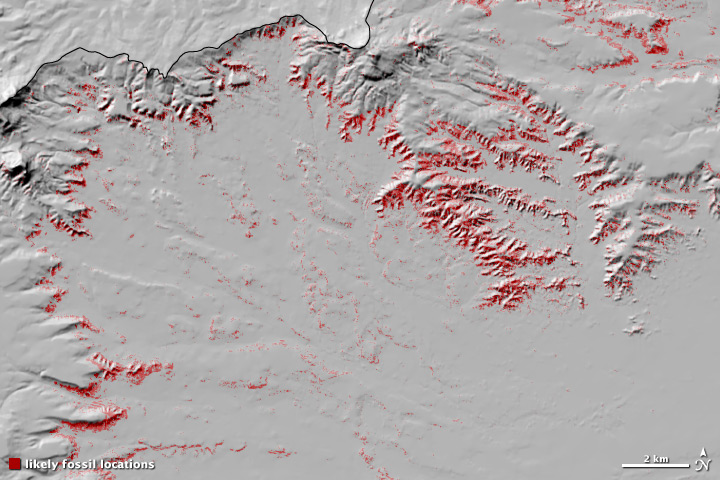 A New Angle on Fossil Hunting

When searching for fossils, paleontologists typically have a lot of work and only a little time. Many fossil sites are only accessible in the summertime, when the landscape is reliably free of snow. Field work is often done far away from the trappings of modern civilization—Internet access, email, reliable cell phone service, running water, and refrigeration. And when the weather turns ugly, rain can easily transform a dry dirt road into a muddy morass, stranding fossil hunters until the mud dries.

But rains aren’t all bad. As the water turns dirt to mud, it also washes away surface sediment, exposing new fossils to sunlight and, hopefully, to sharp-eyed paleontologists. Rains are especially effective in revealing ancient rock layers, and the fossils they might hold, along slopes. Steep slopes can be a nuisance to navigate, but paleontologists know that they are good places to go fossil-hunting.

Robert Anemone, a paleontologist from Western Michigan University, has tried to improve his odds of success in the short fieldwork season by supplementing traditional fossil-hunting with new technology. He and a colleague, Charles Emerson, recently trained a computer to pinpoint likely fossil sites by teaching it what to look for in satellite images. The effort has given a new view of Wyoming’s Great Divide Basin, an area where he has long looked for fossils.

Like the digital family snapshots you can view on your computer, satellite images are composed of pixels arranged in columns and rows like tiny tiles. As Anemone and Emerson analyzed satellite images, they “tagged” pixels that corresponded with sites they knew to be fossil rich from earlier work in the basin. Through a process of iteration, Anemone and Emerson fed the computer fossil-rich and fossil-poor pixels and showed the computer its errors. The process required more than 200 iterations to teach the computer to separate land cover types into classes: barren, scrubland, forest, wetland, and promising fossil beds.

At the end of the training process, the computer was able to accurately identify areas known to hold fossils, and to predict likely fossil localities in places not yet examined by paleontologists.

The image above is derived from the data Anemone and Emerson assembled in their study. It shows an area along the northwestern margin of the Great Divide Basin. Two things are abundant in the area: slopes (indicated by shadows) and likely fossil-rich sites (indicated by red dots). By identifying promising fossil beds, the computer gives Anemone an edge in finding fossils. Not surprisingly, many of the most promising localities occur along steep slopes, where erosion frequently exposes multiple rock layers.