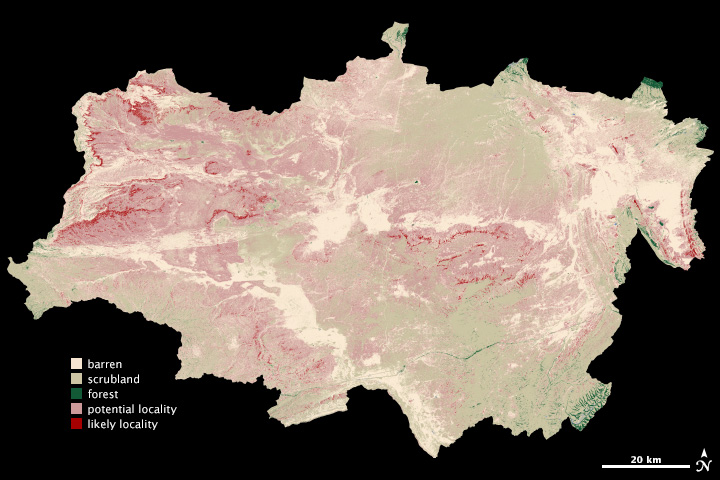 Paleontologists spend their careers searching for the remains of extinct organisms, and many of them find fossils the same way their predecessors did a century ago. They visit sites already known for fossils or study the geology of new sites and gauge their odds of success. Once in the field, fossil hunters scour the surface for bits of bone and teeth.

Every so often, a paleontologist will stumble upon a brand new fossil site. That happened to Robert Anemone in 2009. He had been digging in Wyoming’s Great Divide Basin for 13 years, always visiting the same spots. One day, on a whim, he took a different route and checked out an unknown rock outcrop. It turned out to be the best site he ever found in the Great Divide. It was a very lucky find, but in a way, that was a problem: it all came down to luck.

Wanting to rely on more than luck, Anemone began working with Charles “Jay” Emerson, a geography professor at Western Michigan University who specializes in satellite image interpretation. Anemone and Emerson acquired images from the Enhanced Thematic Mapper Plus (ETM+) on the Landsat 7 satellite. But they didn’t just eyeball the images. Instead, they taught their computers to interpret them with an artificial neural network.

Inspired by neurons in the human brain, neural networks solve big data problems by breaking them down into small pieces. Anemone and Emerson developed their own network to interpret satellite images and trained it to find likely fossil sites. They hoped the network would be able to distinguish between different land types: barren, scrubland, forest, and potential fossil sites. After 200 iterations in a lengthy training process, Anemone and Emerson put their network to the test. They fed it satellite images that the artificial intelligence had not seen before. The network correctly identified almost 80 percent of the sites known to contain fossils.

“This approach saves the time and hassle of staging a 10- to 15-person crew in the field, where you have to carry your food and shelter and you are making good time if you’re driving 10 miles per hour,” Anemone said. To verify that the new approach really would work, Anemone and Emerson spent the summer of 2012 visiting a couple of sites that the network predicted would hold fossils. To learn more about how the field testing turned out, see the new story Hunting Fossils from Afar.