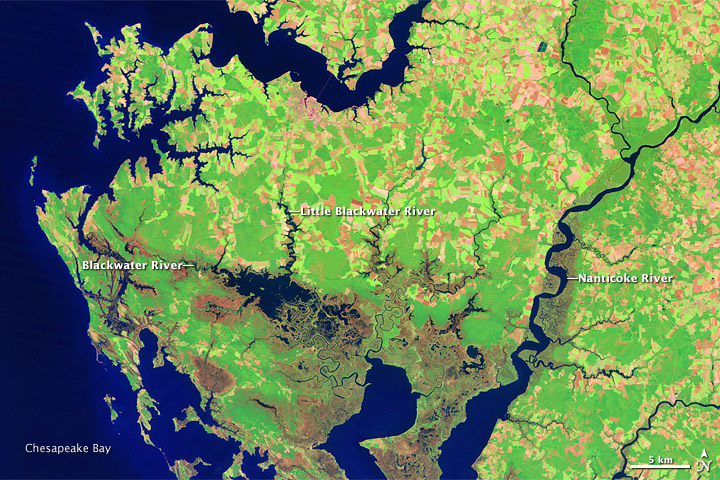 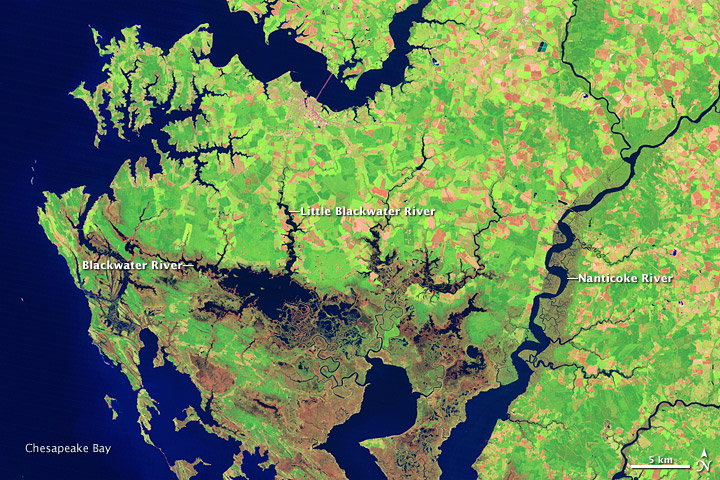 On Maryland’s Eastern Shore, 12 miles south of the colonial town of Cambridge, lies the Blackwater National Wildlife Refuge. The 28,000-acre refuge largely consists of tidal marshes that—together with freshwater ponds and some forested and cultivated lands—form a haven for migrating birds along the Atlantic Flyway. But those marshes are being threatened.

Sometimes called the “Everglades of the North,” Blackwater was established as a migratory bird refuge in 1933. During peak migration (around November), the area attracts some 15,000 Canada Geese; 15,000 ducks (from 20 different species); 5,000 snow geese; and 500 tundra swans. Year-round residents include mallards, blue-winged teals, great blue herons, and bald eagles. Blackwater is also home to the largest natural population of endangered Delmarva fox squirrels.

These tidal marshes account for one-third of Maryland’s tidal wetlands. Aside from providing habitat for waterfowl, the marshes also protect the mainland during storm surges, improve the water quality of the Chesapeake Bay, and play a role in the Bay’s food web.

The Thematic Mapper (bands 7,4,2) on the Landsat 5 satellite acquired these images of Blackwater National Wildlife Refuge on Sept 21, 1984 (top) and August 31, 2011 (bottom). Infrared light is combined with visible light to help differentiate between muddy water, bare earth, and plant-covered ground in these images. Dry, vegetated areas appear bright green, and a patchwork of fallow and vegetated fields range in hue from coral to light green.

Across the 27 years, the combined forces of sea-level rise, invasive rodents, and erosion led to substantial marsh losses, especially along the Little Blackwater River and the open expanses of the Blackwater River. In the 2011 image, wider areas of water are apparent along both rivers, while reddish-brown marshland has disappeared. Marshes also crept inland with rising water levels.

Over the past century, the Blackwater refuge has lost nearly 5,000 acres of tidal marsh, much of it to sea level rise. The rate of relative sea level rise near the refuge is 3.52 millimeters per year; “relative” sea level rise accounts for both rising waters and subsiding land. Researchers at the refuge monitor marsh losses using a mix of surveying measurements and aerial photography.

In Blackwater, the influx of river sediments is very low so the marsh mostly keeps up with sea level rise by accumulating a bed of plant matter (mainly roots and rhizomes) on the marsh floor. Wave erosion and grazing rodents, however, counteract these natural marsh-building efforts. Wave erosion can disperse those buttressing plant materials, especially in marshes adjacent to open waters, where wave action can become more powerful during storms.

As for the rodents...before Blackwater was designated a refuge, the land was used for a fur farm teeming with muskrats and nutria. The nutria, a valued furbearer introduced from South America, has proven itself an especially destructive resident because it tends to focus its feeding activities in one area until it is nearly bare. In 2002, refuge managers began a nutria eradication program; by 2005, the herbivores had been largely removed. Efforts are ongoing to remove the invasive species from the entire Delmarva Peninsula (Delaware, Maryland, and Virginia’s eastern shore).

“Once the majority of nutria were removed from the refuge, there was some natural marsh recovery where significant marsh substrate had been left,” explains Suzanne Baird, a Blackwater National Wildlife Refuge manager. Baird’s team must constantly balance what’s best for wildlife and for the tidal marshes, assuring a healthy, sustainable marsh. For instance, about once a year refuge managers perform prescribed burns on portions of the refuge to stimulate marsh root growth and to combat marsh subsidence.

If the trend of tidal marsh loss continues unchecked, the long-term survival of some endangered species and of the Blackwater Refuge wetlands themselves will be in jeopardy.