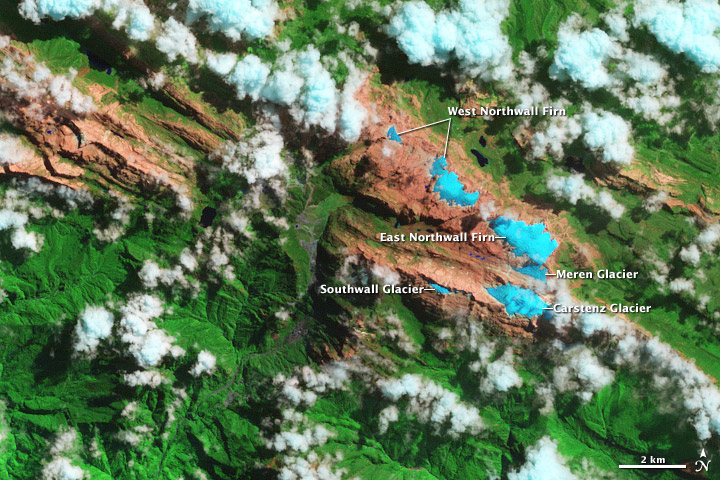 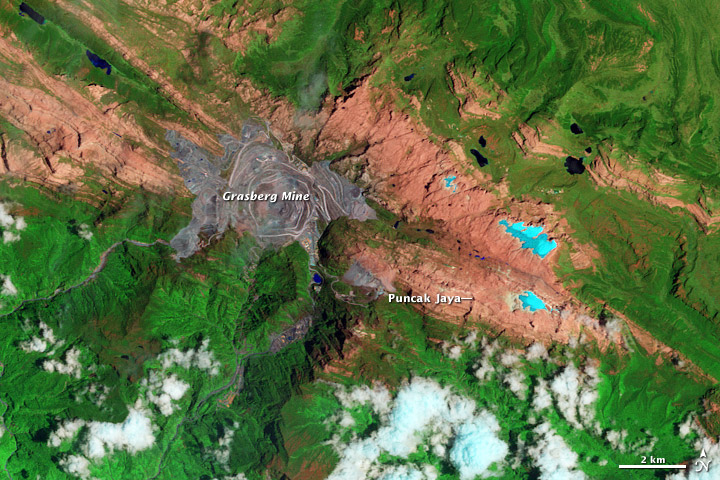 Tropical and glacier don’t seem like words that belong in the same sentence. But mountain peaks near the equator in South America, Africa, and tropical Asia have supported glaciers for thousands of years.

The vast majority of tropical glaciers—over 99 percent—are found in the Andes nations of Bolivia, Columbia, Ecuador, and Peru. Only a few isolated peaks in eastern Africa, including Mount Kilimanjaro and Mount Kenya, support year-round ice. The only country in tropical Asia with glaciers is Indonesia. In 2012, its Maoke mountain range, which runs through the center of the island of New Guinea, still had glaciers on the slope of its tallest peak.

Tropical glaciers have retreated significantly in the past century, and many have lost more than half of their ice in the last few decades. Scientists calculate that if current rates of ice loss continue, many tropical glaciers will be gone within a century. In some cases, it could be as little as decades or years.

Indonesia’s glaciers are no exception. In 1989, five ice masses sat on the slopes of Puncak Jaya, a 4,884-meter (16,020-foot) peak within the Sudirman Range. By 2009, two of the glaciers—Meren and Southwall—were gone. The other three—Carstenz, East Northwall Firn, and West North Wall Firn—had retreated dramatically.

The pair of images above, captured by the Thematic Mapper (TM) on Landsat 4 and Landsat 5, offer a view of the ice loss between 1989 (top) and 2009 (bottom). The images are a combination of shortwave infrared, near infrared, and green light. Ice appears light blue. Clouds are primarily white, though some are tinged with blue. Exposed rock is salmon-colored; forests are green. (The gray area near the center of the 2009 image is the Grasberg mine. Established in 1990 by Freeport McMoran, the open-pit mine has the world’s largest known gold reserve and second largest copper reserve.)

If recent trends continue, scientists estimate that all of Puncak Jaya’s glaciers will be gone within 20 years. Experts think rising air temperatures are the primary reason that the glaciers have lost so much ice so quickly. However, they also note that air temperatures are not the only factor. Changes in humidity levels, precipitation patterns, and cloudiness can also have an impact.

Humidity levels affect how readily glaciers lose mass directly to the atmosphere as part of a process called sublimation. Precipitation, if in the form of snow, can sustain glaciers and cause them to grow, while rainfall can cause ice loss. And clouds affect how much sunlight reaches the ice surfaces. For many tropical glaciers, including those in Indonesia, scientists are still working out the relative importance of these factors, as well as how human-induced climate change influences each of them.

Puncak Jaya’s glaciers have not lost ice at the same rate despite their close proximity. Ice retreated most rapidly from Meren and West Northwall, whereas the rate of loss at Carstenz and East Northwall Firn was slower. That’s because the faster-retreating glaciers were at a lower altitude and below the current snow line for a longer period, explained Indiana University geologist Michael Prentice.