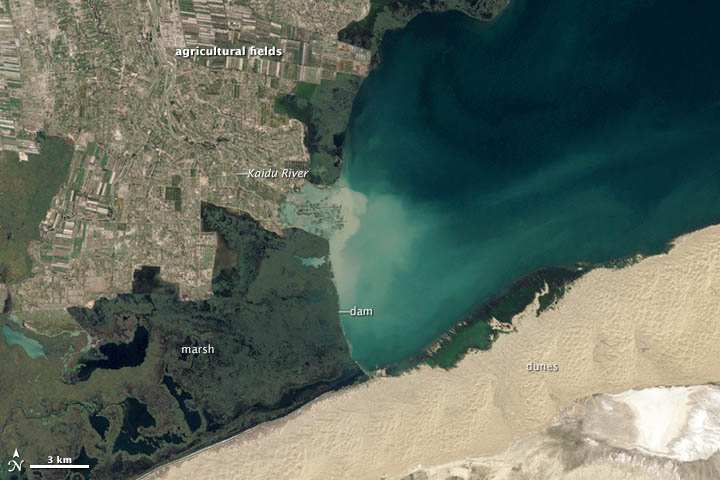 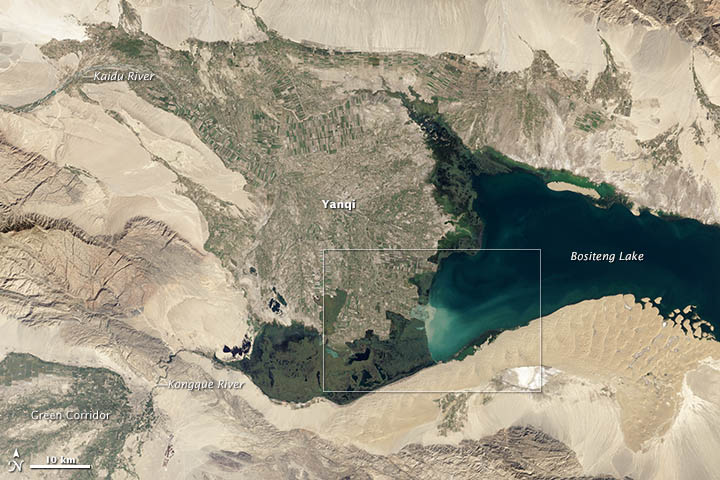 Water: A Precious Resource in the Yanqi Basin

The Yanqi Basin, in China’s Xinjian Province, lies in the Taklamakan Desert. The basin receives an average of just 80 mm (3 inches) of precipitation per year, making it one of the driest places in the world. An indication of this are the dunes visible in the top image, which was acquired on September 17, 2000, by the Enhanced Thematic Mapper Plus (ETM+) on Landsat 7.

Snow and glacial melt from the Tian Shan and Borohoro Mountains, which lie to the west, provide enough water to feed the Kaidu River (lower image). The Kaidu drains into Bositeng Lake, the largest body of fresh water in Xinjian. The shallow lake, 17 meters (58 feet) at its deepest point, used to be much saltier. But the extension of a natural dam in the 1970s (top image), as well as an increasing inflow of fresh water from irrigation canals, has freshened the lake.

West of the dam, there is a marshy area dense with reeds. A pumping station near the dam transports water through a channel along the southern edge of the marsh toward the Kongque River, which flows west toward the so-called “Green Corridor,” a lush area that runs from the nearby city of Korla southeast to Lop Nur. An ancient species of poplar—populus euphratica—considered “living fossils” by botanists, grows in the corridor.

North of the marsh, the patchwork of light green is evidence of farming by people of the town of Yanqi (population 29,000), where growers have drawn water from the Kaidu in significant quantities since the 1960s. Today about 120,000 hectares of land (460 square miles) are in production, making Yanqi one of the most productive agricultural areas in western China. Major crops include grapes, cotton, and chili peppers.

The agricultural activity has not come without consequences. Intensive irrigation has caused a series of environmental problems, the most important being soil salinization. It is common for farmers to flood their fields with river water for irrigation, but the practice has caused groundwater levels to rise. In some cases, the water table has risen to just a few meters below the surface—high enough to dissolve salt that has been buried in the subsoil for decades. The result is that salt has started to build up on many of Yanqi’s fields, making them unusable.

Intensive irrigation also has reduced the amount of water flowing down the Kaidu, through Lake Bositeng, and out through the Kongque River. This has created periodic water shortages downstream in the Green Corridor and put the area’s poplar forests at risk.

NASA Earth Observatory image created by Jesse Allen and Robert Simmon, using Landsat data provided by the United States Geological Survey. Caption by Adam Voiland. Congratulations to Yiannis Raftopoulos and Susan Myers for being the first to identify the location and many of the features in the image.