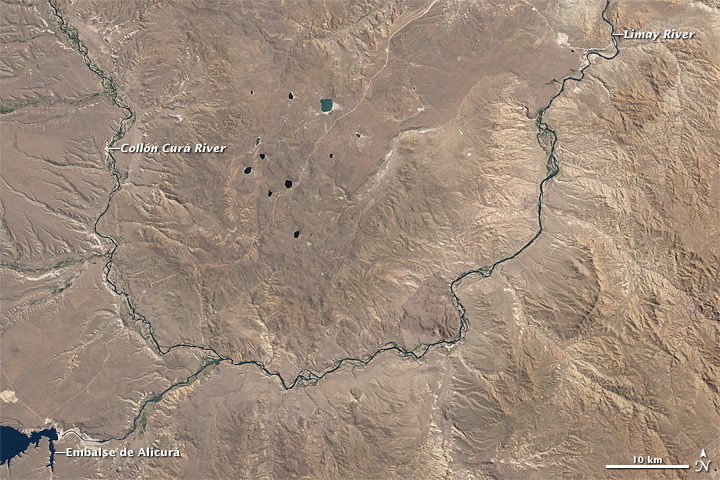 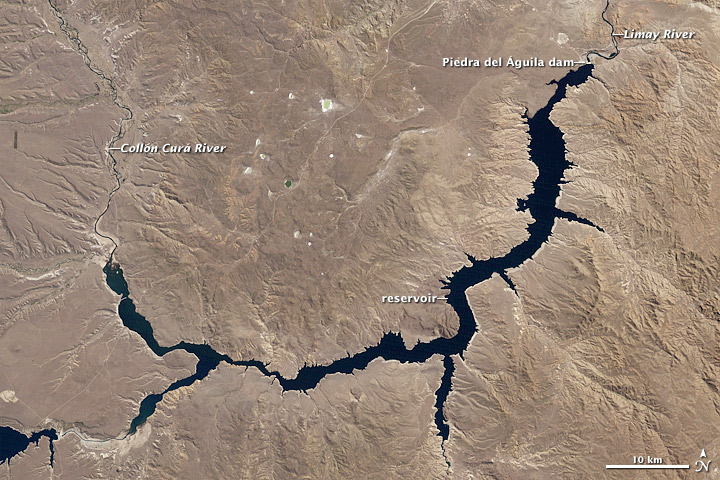 The Limay River originates at the eastern end of Nahuel Huapi Lake and flows northeastward through Argentina until it joins the Río Negro. Human intervention has significantly reshaped the Limay River over the past few decades, namely through the construction of dams such as Piedra del Águila (“Stone of the Eagle”).

Acquired by the Thematic Mapper on the Landsat 5 satellite, these natural-color images compare the Limay River before and after completion of the dam. The top image shows the region on October 29, 1986, and the bottom image shows the same region on October 14, 1998. The manmade Piedra del Águila Reservoir covers roughly 300 square kilometers (100 square miles) and extends partway up the tributaries feeding the Limay River, including the Collón Curá River.

The dam generates roughly 24 percent of Argentina’s hydroelectric energy, according to a 2012 study. The creation of the dam and reservoir did, however, have an effect on the indigenous Mapuche Indians. About 150 of the 500 people living in the Pilquiniyeu del Limay reservation had to relocate their homes.

The ecosystem surrounding Piedra del Águila Reservoir is arid—a scrubby steppe shaped by dry weather and wind. A study published in 2007 suggested that water might become even more scarce in a warming climate. The analysis found that warming temperatures could decrease precipitation along the Limay watershed, reducing stream flow and available hydropower. Water stored in regional snow and ice cover might buffer the effects.