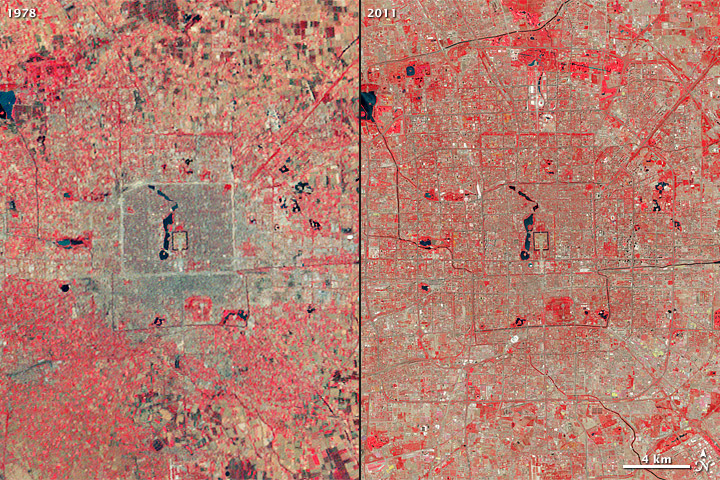 Beijing is one of the oldest cities in the world. In the past four decades, it has grown to become one of its most densely populated. In this pair of images from the Landsat satellites, the explosive growth of this ancient city is clearly visible. In 1972, Beijing's population was roughly 7.9 million people. By 2010, the population swelled to more than 12 million.

The left image above shows the Chinese capital as observed by the Multispectral Scanner System on Landsat 3 on June 21, 1978 (left). The right image was captured on August 8, 2010, by the Thematic Mapper on Landsat 5. Both are false-color views using the green, red, and near-infrared bands.

The 30-meter resolution of Landsat scenes is ideal for portraying cities as they grow and change. And the 40-year record is like a time machine, allowing researchers and laymen to scroll back through the years to compare one period in a city's life to another.

“In these views of Beijing, Landsat tracks not only an impressive example of global urban growth, but also the footprints of social and political change," says Tom Loveland, a scientist with the Earth Resources Observation and Science Center of the U.S. Geological Survey (USGS).

Starting in the late 1970s, market-oriented economic reforms by the Chinese government provoked an economic boom and rapid expansion of the city. Since the 1980s, a series of six ring roads have been built around the city center, and several of them separate regions by specialties—such as flourishing shopping areas, a financial district, and a major electronics center. To the west and northwest, the city is hemmed in by the rugged Taihang Mountains, so development has spread more vigorously to the south and east across the relatively flat coastal plain.

Before 1979, the government limited housing to the “Outer City.” A walled fortress surrounded the ancient heart of the capital, the moat-lined “Forbidden City” and Imperial Palace. Its rectangular outline is still visible due to the creation of canals and roads along the path of the original wall.

For more information on Landsat, read: Landsat Looks and Sees: Forty Years of Observations Reveal a Changing Planet and Society.