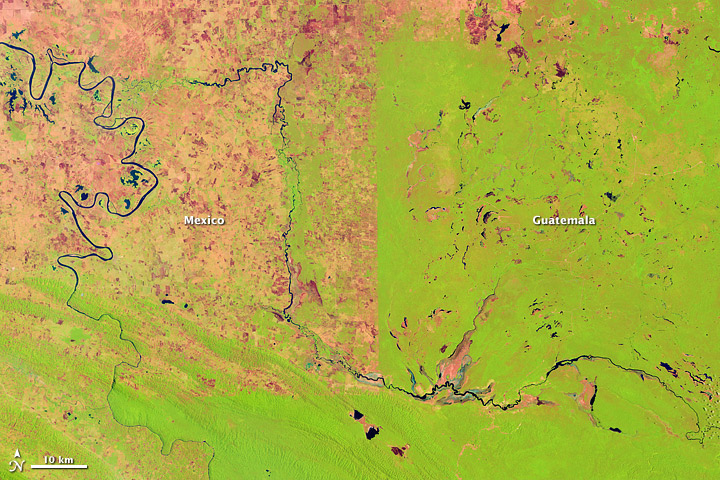 Border Between Mexico and Guatemala

A glance at a traditional map shows neatly printed names and sharp lines dividing countries from one another. When the view switches to satellite imagery, human political boundaries usually disappear. But sometimes the political realities of a country are written into the landscape, and never was that more clear than in this image of the Mexico-Guatemala border.

Produced in 1988, the Landsat image above starkly shows a line between forest clearing in Mexico and untouched forest in Guatemala. It became the driving force behind the protection of 4 million acres of land in Guatemala and cooperative conservation efforts across the border in Mexico.

It was a fortuitous accident that anyone saw the deforestation at all. In the late 1980s, local authorities were planning to dam the Usumacinta River for hydroelectric power. However, a number of ancient Mayan cities were tucked into that river valley, and conservationists and archaeologists wanted to make sure that they were preserved. The National Geographic Society partnered with NASA to document both the known and undiscovered archeological sites before the damming of the river.

As part of that effort, archeologist Tom Sever put together two Landsat scenes: the western portion of the river as seen from Landsat 4 on May 20, 1988, and the eastern part from Landsat 5 on April 14, 1986. Mexico’s relative politcal stability had led to agricultural development and clearing of the forest. At the same time, Guatemala’s ongoing civil war saw rebels living in the Petén and, as a side effect, limiting development of the forest.

The border image, published in National Geographic’s October 1989 issue, started a discussion about conservation between the presidents of Guatemala and Mexico that led to cooperative planning of parks in both countries. According to Sever, President Cerezo told Sever and colleagues that the border image was the deciding factor that led to the Guatemalan Congress approving his creation the Maya Biosphere Reserve in 1990.

Read more about this story here.