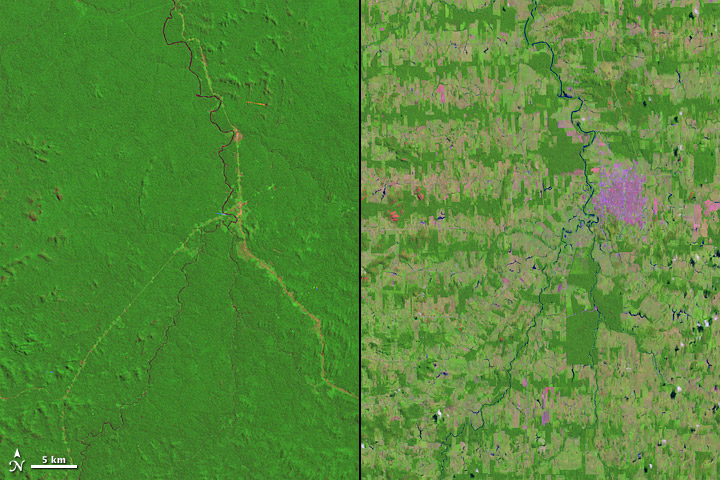 Deforestation in the Amazon Rainforest takes on many different patterns. In Rondônia, a state in Western Brazil, deforestation took on the fishbone pattern revealed in these Landsat images from 1975 and 2012.

Access to this remote region began with the building of a major road stretching from north to south. Secondary roads were then slowly cut through the dense forest at right angles to the initial road. Settlers cleared the area by first cutting and then burning the forest. As farmed lands grew larger and closer together, they began to merge into a large area of deforestation with a distinctive pattern.

“Because these roads cut deep into the rainforest and then spread outwards, there’s a much greater loss of habitat and species than if there was a single area of deforestation because the amount of edge is critical for biodiversity,” said Compton Tucker, a biologist at NASA’s Goddard Space Flight Center. A detailed study of Landsat satellite images by Tucker and David Skole (Michigan State University), found that the rate of deforestation in the Amazon was lower than previously thought, but the impact on biodiversity was much greater because of habitat fragmentation.

Tucker says this biodiversity paradox can largely be attributed to the fishbone pattern of deforestation, as it creates many more exposed edges between deforested areas and intact forest. These edge areas suffer more wind damage and desiccation (drying). It’s also easier for humans to access the areas for hunting, poaching, animal capture, and legal and illegal logging.

Skole and Tucker found that between 1980 and 1992, more than 1,000 square miles (3,000 square kilometers) of forest in Rondônia was lost each year. The beginning of the loss coincided with a 1979 decision by Brazil’s Program of National Integration to build roads in the forest and to offer cheap land for agriculture. The researchers images of deforestation in Rondônia were widely publicized when the paper was published in Science in 1993, and they became the visual shorthand for tropical deforestation worldwide.

In recent decades, the center of deforestation in Brazil has shifted east to the states of Mato Grosso and Pará, where large tracts of land are being cleared for mechanized agriculture, rather than small farms. Even so, Brazil’s overall rate of deforestation has slowed, attributable in part to more rigorous enforcement against illegal deforestation and logging activities.