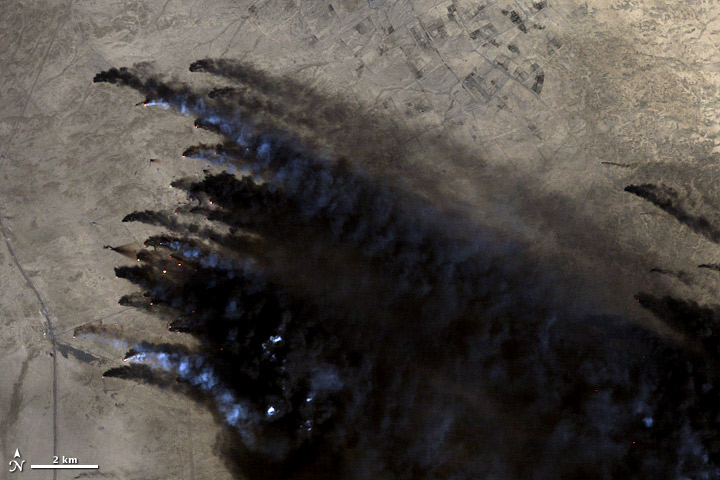 In 1991, Landsat captured the devastating environmental consequences of war. As Iraqi forces withdrew from Kuwait, they set fire to more 650 oil wells and damaged roughly 75 more, which then spewed crude oil across the desert and into the Persian Gulf.

Fires burned for ten months. According to a 2009 study published in Disaster Prevention and Management, a response team that comprised approximately 11,450 workers from 38 countries used familiar and never-before-tested technologies to put out the fires. When the last one was extinguished in November 1991, about 300 lakes of oil remained. Airborne soot and oil fell out of the sky and mixed with sand and gravel to form “tarcrete” across 5 percent of Kuwait's landscape.

Emergency responders and scientists in Kuwait used Landsat and other satellite data to locate and monitor the plumes of smoke and burning wells. The image above from Landsat 5’s Thematic Mapper shows Kuwait in June 1991 while the fires were burning. Subsequent studies used Landsat to look at the before and after effects of the fires and to monitor changes to the oil lakes.