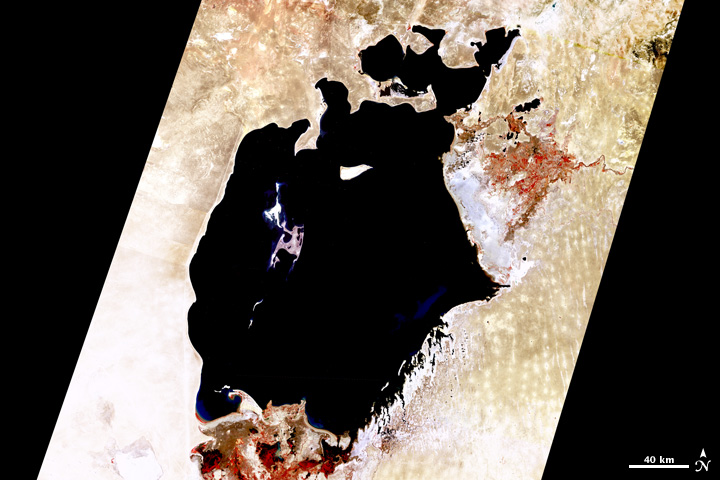 The Aral Sea was once the fourth largest lake in the world. Two rivers—the Syr Darya and the Amu Darya—carried snowmelt and rainfall from distant mountains to the Aral Basin, where the water pooled in an otherwise arid region of Kazakstan and Uzbekistan. For centuries, the Aral Sea supported farming in the river deltas and a thriving fishing industry.

Then in the middle of the 20th century, the Soviet Union decided to convert the local economy to cotton production and so diverted the two rivers to irrigate the fields. With no other major sources of water, the Aral Sea has been evaporating and shrinking ever since. After 50 years, the lake’s area is 25 percent of its original size and it holds just 10 percent of its original volume of water.

The image mosaic above shows the Aral Sea in 1977, as viewed by the Landsat 2 satellite. The false-color image shows vegetation in red, water in black, and the surrounding desert in brown and white. Since the 1970s, Landsat has helped scientists walk back in time to determine the amount of water loss and the changes to the shoreline. For more recent views of the shrinking Aral Sea, see our World of Change time series.

The drying of the Aral Sea has led to a host of unintended consequences. Species of freshwater fish died off when the slightly brackish water turned increasingly salty. Jetties and ports once situated on the coast are now sometimes as far as 70 miles (120 kilometers) inland. The intense agriculture upstream also meant the water that did arrive in the lake was polluted with fertilizers, pesticides, and metals that collected in the sediment.

The local climate even changed. Without the moderating effect of the broad body of water, winters became colder and summers hotter—leaving a shorter growing season. As the sea shrank and dried, the polluted sediments became airborne dust that fell back over the fields, stunting crop growth and causing health problems for people of the region, including higher rates of cancer.

The government of Kazakstan, with funding from the World Bank, completed a dam in 2005 that separates the North Aral Sea from the large southern basin. Fed by the remains of the Syr Darya River, the shoreline of this much-reduced lake has since stabilized and fish are slowly returning.