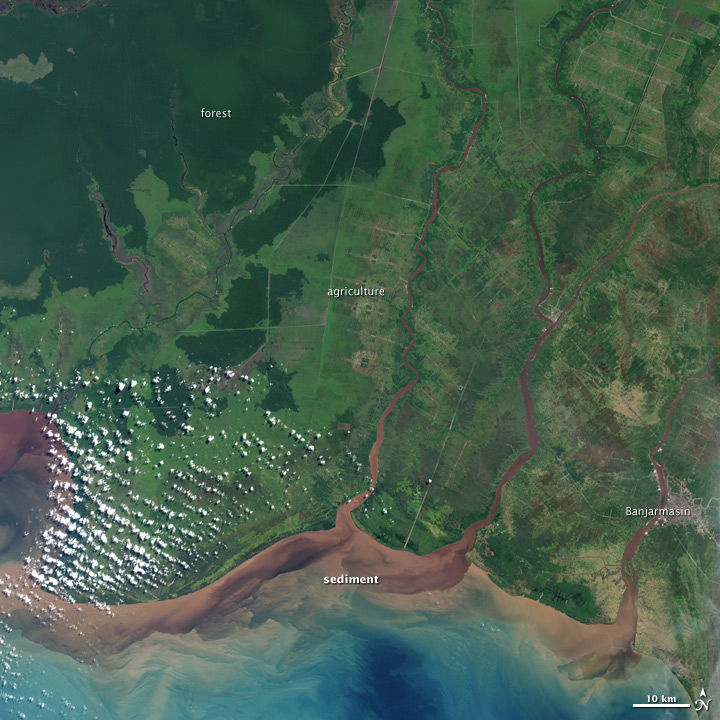 Kalimantan, the Indonesian portion of Borneo, was once a lush tropical landscape full of some of the most sought-after timber in the world. In recent years, a combination of logging and agriculture has contributed to a rapidly changing landscape.

Forests are gradually being cleared and replaced by palm oil plantations, a response to the ever-increasing global demand for biofuels. As palm oil generates ever more revenue, more land is cleared. Whether for logging—which has moved farther from the coast and higher up the slopes of the mountains—or for agricultural purposes, the forests of Kalimantan are being cleared at an increasing rate.

The image above shows a southern section of Kalimantan as it appeared on July 16, 2000. The natural-color view was acquired by the Enhanced Thematic Mapper Plus (ETM+) on the Landsat 7 satellite. Light green areas with gridlines of light brown show portions of rainforest that were cleared for palm oil plantations and roads. Dark greens show the remaining rainforest.

When trees are logged, erosion can become a problem. The tropical climate of Southeast Asia means Kalimantan endures seasonal fluxes of monsoon rains and dry seasons. During the dry seasons, ground that once was covered by a canopy of trees is exposed to the sun. The soil dries until dusty sediments sit on top, untethered to the ground. When the dry season ends and the monsoon rains pour down on the land, the sediment gets carried down from the mountains to the Java Sea. In this image, rivers appear to be red, a result of the sediment and soil. Once the sediment spills into the sea, it traces the movement of the currents in waves and swirls.

That flow of sediment is bad news for the palm oil plantations. Many of the nutrients necessary to grow healthy crops are being washed into the sea, leaving behind soil that is less than ideal for sustaining palm oil crops.