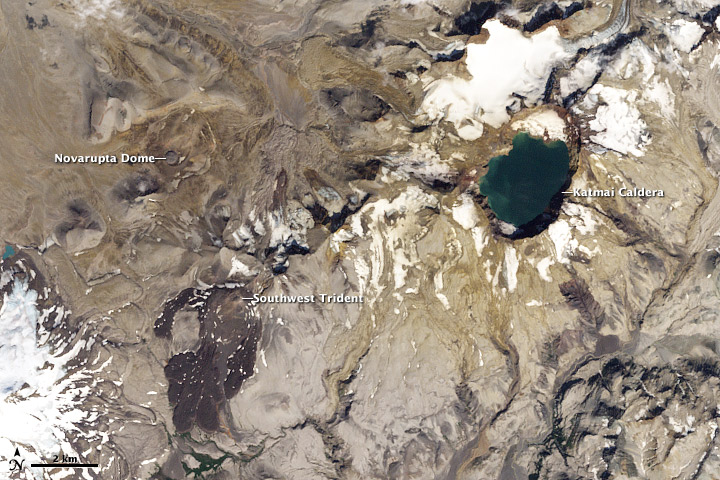 The land shook with at least fourteen earthquakes of magnitude 6 or higher. More than 13.5 cubic kilometers (3 cubic miles) of molten rock, or magma, blasted out of the Earth. Another 17 cubic kilometers of ash and volcanic debris spewed into the air or rolled across the hillside in pyroclastic flows. And it all happened in a matter of 60 hours.

“That is a rate of nearly 220 million cubic meters per hour, which is roughly 520 million tons per hour,” wrote volcanologist and blogger Erik Klemetti. “Or to put it another way, that is about 5,300 Nimitz-class aircraft carriers per hour. Now that is an eruption!”

The eruption of Novarupta volcano in Alaska from June 6–8, 1912, was the largest of the 20th century. By volume, it was three times the size of the Pinatubo eruption and 30 times that of Mount St. Helens. But because of the remote location—where the Alaskan Peninsula starts to stretch into the Bering Sea—the sparse population, and the infancy of the modern study of volcanology, it was decades before scientists could tease out the details and attribute it to the right volcano. Scientists have spent decades digging through the debris and through human accounts to fill in the picture.

The natural-color image above, acquired by the Enhanced Thematic Mapper Plus instrument on Landsat 7, shows the Novarupta Dome, Katmai Caldera, and the Southwest Trident as they appeared on August 13, 2002. Mostly free of snow in this summer image, the landscape is shaded in the browns and tans of volcanic tephra, or hardened ash. The dome of Novarupta and the Southwest Trident are darkened by hardened lava. (Trident had a lava flow as recently as 1974.)

For many years, the June 1912 eruption was mistakenly attributed to Katmai, which is 10 kilometers (6 miles) away. But in fact, the event at Novarupta—the name means “new eruption”—stole its contents from beneath the neighboring volcano. Most of the magma had been stored beneath Katmai, so when the new hole in the Earth opened to the northwest, the magma drained away and actually caused Katmai to collapse dramatically. The resulting caldera is now filled with a 200-meter-deep lake.

In the aftermath, a nearby river valley was filled with up to 600 feet of ash, pumice, and other volcanic debris. The debris around Novarupta seethed with heat and steam emissions from fumarole vents for more than a decade, leading scientist Robert Griggs to call it the “Valley of Ten Thousand Smokes.”

Airborne ash from the eruption dropped a foot of ash as far away as Kodiak and a dusting in Puget Sound, Washington. Ash circled the globe and lowered global temperatures for a year, leaving traces as far as Europe, Algeria, and the Greenland Ice Sheet.