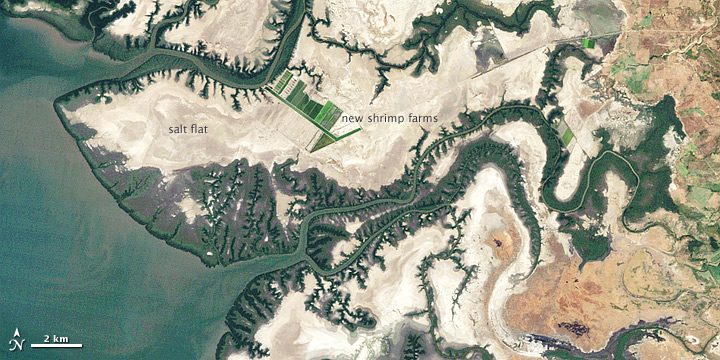 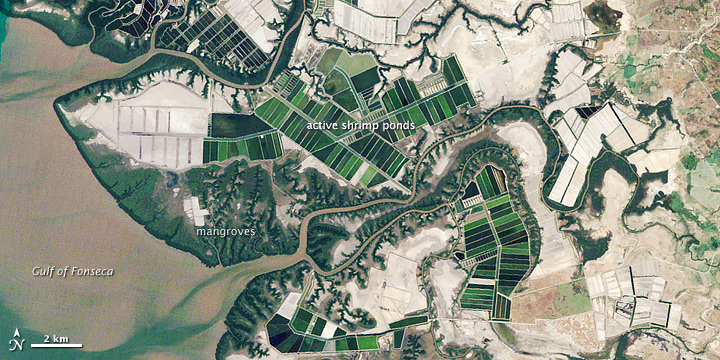 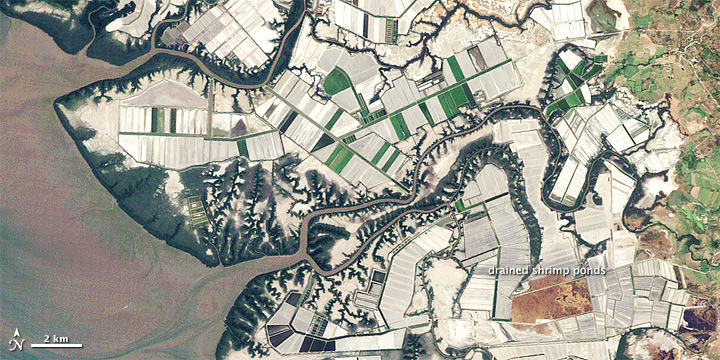 Along the Pacific coast of Honduras and Nicaragua, in the Gulf of Fonseca, the landscape has changed over the past forty years. An aquaculture industry has developed, producing a bountiful harvest of shrimp within sight of coastal mangroves and wetlands. The shrimp farms also produce a rich harvest of arguments, with some people seeing an economic success story and a reasonable use of coastal land, while others decry unnecessary and destructive changes to wetlands.

All three images above show the eastern end of the Gulf of Fonseca as viewed by the Thematic Mapper (TM) instrument on Landsat 5. The top image was acquired on January 19, 1986; the middle on January 23, 1999; and the bottom image on January 8, 2011. All three were captured during the dry season.

In these natural-color images, tidal (salt) flats are shades of beige and gray, mangroves are dark green and edged in brown, and inland agricultural lands are shades of brown and light green. Shrimp ponds are mostly rectangular in shape. When active and filled, the ponds take on green hues because of the phytoplankton (algae, diatoms, blue-green algae) growing in the water. When drained, the ponds are gray because of the salty, clay-filled bottom.

From the 1980s until the late 1990s, shrimp farming in this area was mostly conducted in three harvests each year. But then researchers figured out that shrimp were growing better in the wet season (roughly May to November), when the waters in the estuary have much lower salinity and better water quality, according to Bart Green, an aquaculture researcher with the Agricultural Research Service of the U.S. Department of Agriculture. In the dry season (December to April), water can become hypersaline and water quality suffers, stunting shrimp production.

In the images, more ponds are dry in January 2011 than in January 1999. Over the past decade or so, shrimp farmers have decided that it's more economically feasible to work one or two harvests during the rainy season than to fight nature for a harvest in the dry season. By draining ponds in the dry season, farmers can allow the elements (sunlight and wind) to break down algae and fish waste, while breaking the cycles of waterborne disease-carrying organisms.

Note that the waters of the Gulf of Fonseca (image left) appear to show more sediment in 1999 and 2011 compared to 1986. Green noted that sediment and soil from inland farms have been accumulating and slowly extending the land further into the Gulf while also narrowing several estuary channels. However, there is likely a simpler explanation for the difference in water color in the Bay: tides. Based on tidal charts, it is likely that images were acquired at low tide in 1999 and 2011, and at a higher stage in 1986. The difference in tides can be as much as 3 to 4 meters (10 to 13 feet) from low to high in this area.

Shrimp has become one of Honduras’s primary exports, and the nation is one of the largest shrimp producers in the Americas. At the same time, critics note that the industrial scale of farming has had impacts on biodiversity on land and on wild-catch fisheries in the Gulf of Fonseca. The Convention on Wetlands of International Importance (the Ramsar Convention) counts the area as a wetland of international importance. This balancing game has been going on for decades, and it is not clear if the region will stay in balance.

“When I visited Honduras in the late 1990s, I was impressed with the care that most of the farms took in gerrymandering their ponds around the mangrove swamps, so as not to impact them excessively,” said George Ward, associate director of the Center for Research in Water Resources at the University of Texas. “The ponds were mainly situated on tidal flats and set back from the mangrove fringe. The 2011 [bottom] image seems to belie this strategy; it looks like some ponds are crowded right up to the waterways.”

“This area has been one of the models for responsible aquaculture,” said Green, who visited this part of Honduras before many of the shrimp farms were carved out. “Aquaculture is still developing; we've had just tens of years compared to thousands for agriculture. But these farms have contributed significantly to economic development. And while there has been some environmental impact, it is not an undue amount for the area compared to the benefits.”