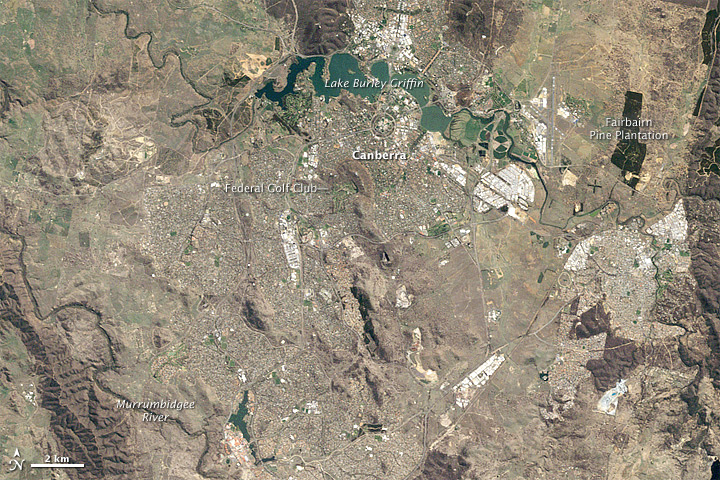 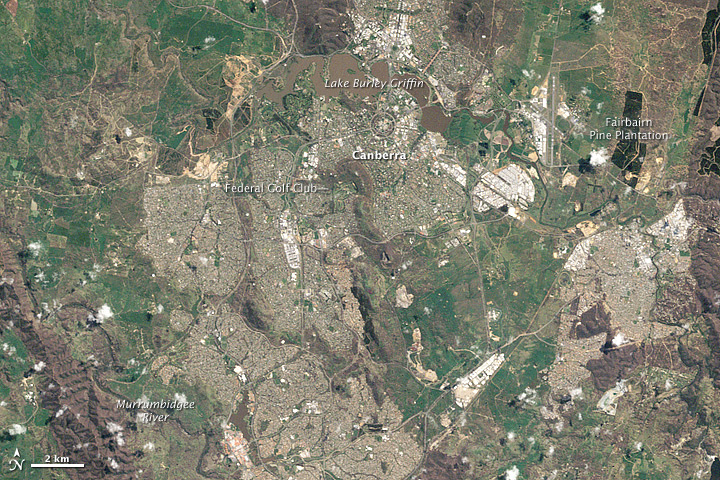 In September 2008, Australia’s capital city of Canberra was parched. Situated in southeastern New South Wales, Canberra had experienced high temperatures and paltry rains, part of a prolonged drought nicknamed the Big Dry. Yet within two years, the landscape was transformed.

The Thematic Mapper on the Landsat 5 satellite acquired the top image on September 24, 2008, and the bottom image on October 19, 2010. These natural-color images show the stark difference that rainfall makes. In 2008, the Murrumbidgee River Valley, the Fairbairn Pine Plantation, and the well-watered Federal Golf Club appear as islands of green in a sea of brown. Two years later, vegetation fairly carpets the area.

The Big Dry began around 1997 and, by some estimates, lasted until 2011. In September 2008, Canberra was still deep in drought, and severe dust storms plagued parts of New South Wales. The Australian Bureau of Meteorology (BOM) reported severe rainfall deficiencies in the short term, “against a backdrop of decade-long rainfall deficits,” and further described the conditions as “without historical precedent.”

The situation in October 2010 was markedly different. According to the BOM, it was the fourth consecutive month with above-average rainfall, and the wettest October since 1976. Relatively cool temperatures helped ease drought conditions, and around Canberra, vegetation sprang to life. The revived vegetation provided a welcome food source for kangaroos, many of whom had been crossing Canberra’s busy roadways to feed on well-watered grass.

Canberra was just one of many communities affected by the drought. A study published in 2012 argued that the Big Dry was not a regional phenomenon, but a continental one. The drought, the researchers found, reduced rainfall, water storage, and vegetation in a broad swath across Australia, from northwest to southeast. By early 2012, residents of southeastern Australia were contending with a different natural hazard: floods.

Links above provide additional images of Canberra, including September 2009, when drought conditions were just starting to ease; and 2011, which brought less rain than October 2010, but continued southeastern Australia’s relatively wet weather. The World of Change feature on drought cycles in Australia shows changing conditions roughly 500 kilometers (300 miles) west of Canberra.