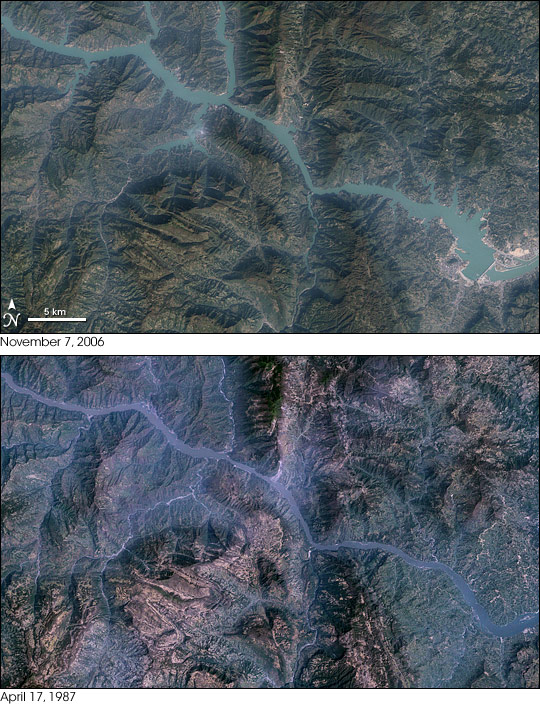 The longest river in Asia, the Yangtze River brings mixed blessings to China. Although it meets the water needs of millions of people, the river regularly overflows its banks. In the twentieth century alone, Chinese authorities estimated, the river claimed the lives of 300,000 people. To protect some 15 million residents and 3.7 million acres (roughly 14,970 square kilometers) in the lower Yangtze floodplains, China began construction on the Three Gorges Dam in 1994. Like the river itself, the dam appears to be a mixed blessing: the reservoir was expected to submerge about 632 square kilometers (244 square miles) of land and force the relocation of more than a million people. The reservoir was anticipated to submerge ecologically and culturally important sites in the three gorges—Qutang, Wu Xia, and Xiling—that were the dam’s namesake.

These images show the Yangtze River in the vicinity of the Three Gorges Dam (lower right). Landsat 7 acquired the top image on November 7, 2006, after the main wall was complete. Landsat 5 acquired the bottom image on April 17, 1987, several years before construction on the dam began. In the top image, the dam’s main wall appears as a thin, buff-colored line crossing the water. The water body balloons out markedly in the later image—evidence of the rising water level. The water has backed up and expanded tributaries well upstream of the dam (upper left of image).

In addition to observing the progress of the dam’s construction, satellite data have revealed some of its effects. A 2006 study relied on rainfall measurements from the Tropical Rainfall Measuring Mission (TRMM) and land surface temperature observations from NASA’s Terra and Aqua satellites to identify the dam’s impact on local weather. Although previous studies had indicated weather impacts on a scale of approximately 15 square kilometers (6 square miles), the newer study indicated weather changes over an area of roughly 160 square kilometers (62 square miles).

Specifically, satellite observations combined with computer models suggested that, after the water level abruptly rose in 2003, the Three Gorges Dam reduced precipitation in the dam’s immediate vicinity and increased it farther away. Some 100 kilometers to the west of the dam are the Daba Mountains, and northwest of them, the Qinling Mountains. Between these mountain ranges, precipitation increased during the same period. Meanwhile, daytime land surface temperatures dropped about 0.67 degrees Celsius (1.2 degrees Fahrenheit) between the mountain ranges, probably resulting from increased cloud cover owing to evaporation off the reservoir.

Besides weather changes, some additional concerns had surfaced. Although the Three Gorges Dam was designed to withstand 100-year floods, some researchers stated that earthquake activity was a greater threat. And in April 2007, China’s Xinhua news agency reported pollution in the dam’s reservoir, from pesticides, fertilizer, and sewage. The pollution appeared to have been carried to the reservoir from tributaries, according to a joint study between the Chinese Academy of Sciences, the World Wildlife Fund, and the Yangtze River Water Resources Commission.

For more information, please visit the NASA Portal article on the Three Gorges Dam. Also see Earth Observatory images of the dam from May 15, 2006 and July 17, 2000

You can also download a 30-meter-resolution KMZ file of the Three Gorges Dam for use with Google Earth.