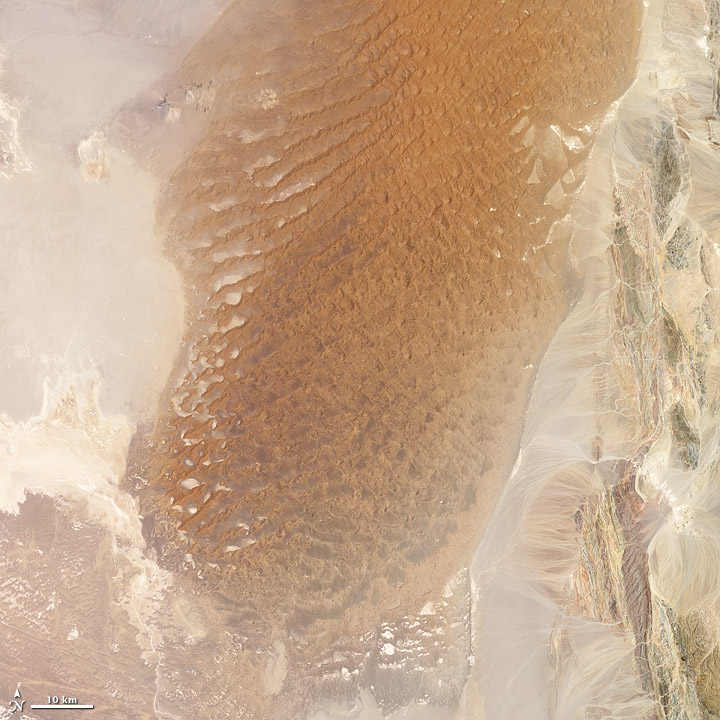 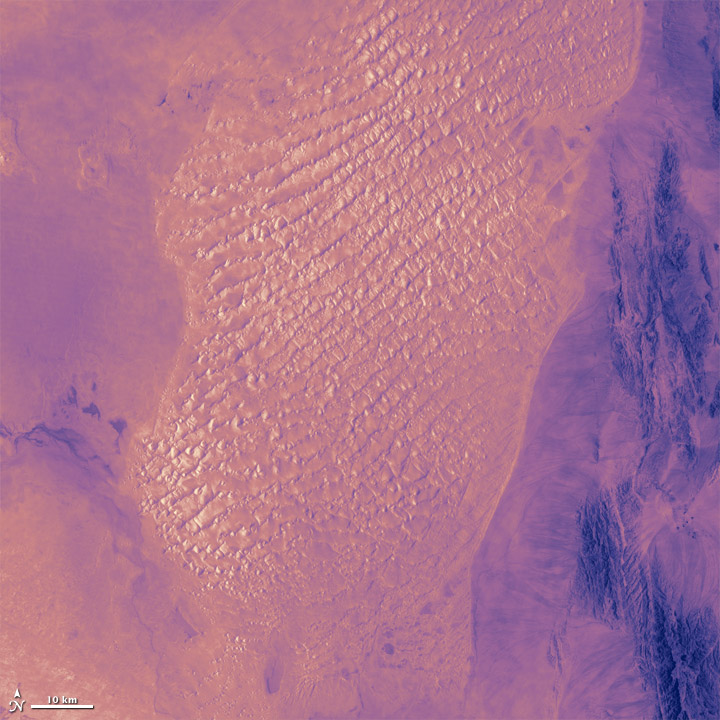 The Hottest Spot on Earth

According to the World Meteorological Organization (WMO), the highest temperature ever measured on Earth came on September 13, 1922, when the thermometer at a weather station in El Azizia, Libya, reached 58.0°C (136.4°F). That measurement shifted the title for “the world’s hottest place” away from Death Valley, California, which set the previous record (56.7°C or 134°F) in July 1913.

But more recent research says that neither location has a true claim to the title. “Most of the places that call themselves the hottest on Earth are not even serious contenders,” says Steve Running of the University of Montana.

The images above show a portion of the Lut Desert in Iran. The top image is natural color, while the bottom is infrared; both were acquired on July 6, 1999 by Landsat 7. In a study of seven years of global land surface temperatures as measured by satellites, the Lut Desert ranked as hottest in five of the years.

“The Earth’s hot deserts—such as the Sahara, the Gobi, the Sonoran, and the Lut—are climatically harsh and so remote that access for routine measurements and maintenance of a weather station is impractical,” says David Mildrexler, also at the University of Montana. “The majority of Earth’s hottest spots are simply not being directly measured by ground-based instruments.”

That's where satellites come in. Orbiting instruments can scan every parcel of the planet's surface and fill in the gaps in global temperature measurements. In their analysis, Running, Mildrexler, and Maosheng Zhao scrutinized global measurements of land “skin” temperatures from 2003 to 2009. As opposed to air temperatures, which are measured 1.5 to 2 meters above the ground, land skin temperatures reflect the pure heating of a parcel of ground by radiation from the sun, the atmosphere, and other heat flows.

The University of Montana team found that the location of the world’s hottest spot can change from year to year, though the conditions don’t. Think dry, rocky, and dark-colored lands. In the images above from the Lut Desert, note how the dark, gravel-covered regions of the natural-color image show up as the brightest (and hottest) areas in the infrared imagery of the land surface in the lower image. Lightly vegetated areas (in green, at the right edge of the image) are darker and cooler in infrared because shade and transpiration—the release of moisture by plants—cool the surface slightly. Likewise, the brightest sands in the top image are comparatively cooler in infrared because they reflect more sunlight.

To learn more about how scientists measure temperatures, read the Earth Observatory’s new feature: “Where is the Hottest Place on Earth?”