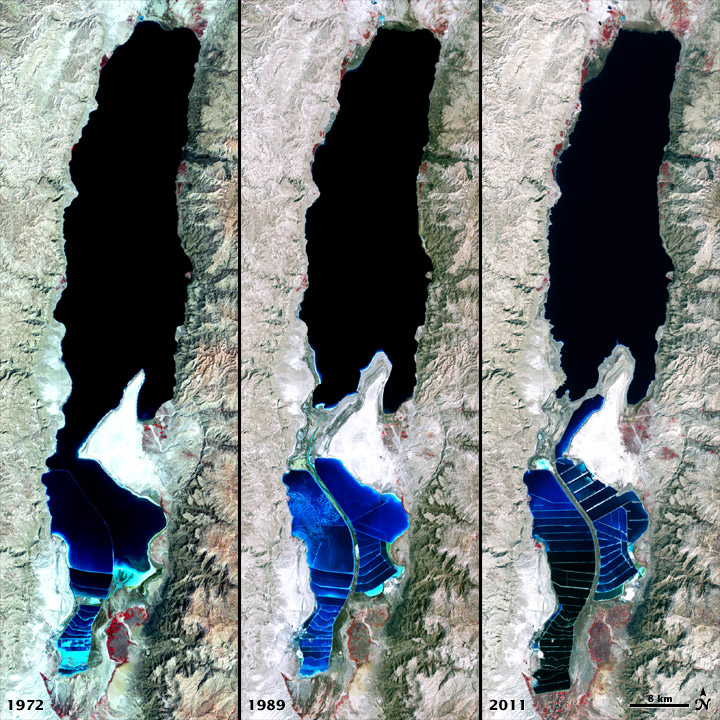 The Dead Sea is so named because its high salinity discourages the growth of fish, plants, and other wildlife. This salt lake resides in a depression in the Earth's crust, where the continents of Africa and Asia are pulling away from each other. It has pulled in visitors and industries for thousands of years.

The Dead Sea is the lowest surface feature on Earth, sitting roughly 1,300 feet (400 meters) below sea level. On a hot, dry summer day, the water level can drop as much as one inch (two to three centimeters) because of evaporation.

The false-color images above were captured by the Landsat 1, 4, and 7 satellites. The Multispectral Scanner System on Landsat 1 acquired the top image on September 15, 1972. The middle image was acquired on August 27, 1989, by the Thematic Mapper on Landsat 4. The third image is from the Enhanced Thematic Mapper Plus on Landsat 7 on October 11, 2011.

All three images include a combination of near-infrared, red, and green wavelengths. Deep waters are blue or dark blue, while brighter blues indicate shallow waters or salt ponds (in the south). The pale pink and sand-colored regions are barren desert landscapes, while green indicates sparsely vegetated lands. Denser vegetation appears bright red. Near the center is the Lisan Peninsula, which forms a land bridge through the Dead Sea.

The ancient Egyptians used salts from the Dead Sea for mummification, fertilizers, and potash (a potassium-based salt). In the modern age, sodium chloride and potassium salts culled from the sea are used for water conditioning, road de-icing, and the manufacturing of polyvinyl chloride (PVC) plastics. The expansion of massive salt evaporation projects are clearly visible over the span of 39 years.

The region is also famous for its historical and religious significance. Between 1947 and 1956, a series of 972 ancient papyrus-and-ink texts were discovered in caverns near the sea’s northeastern shore. These “Dead Sea Scrolls” are some of the oldest preserved fragments of the Hebrew Bible and other Judeo-Christian texts.

NASA and the U.S. Geological Survey (USGS) jointly manage Landsat, and the USGS preserves a 40-year archive of Landsat images that is freely available data over the Internet. The next Landsat satellite—now known as the Landsat Data Continuity Mission (LDCM)—is scheduled for launch in January 2013.