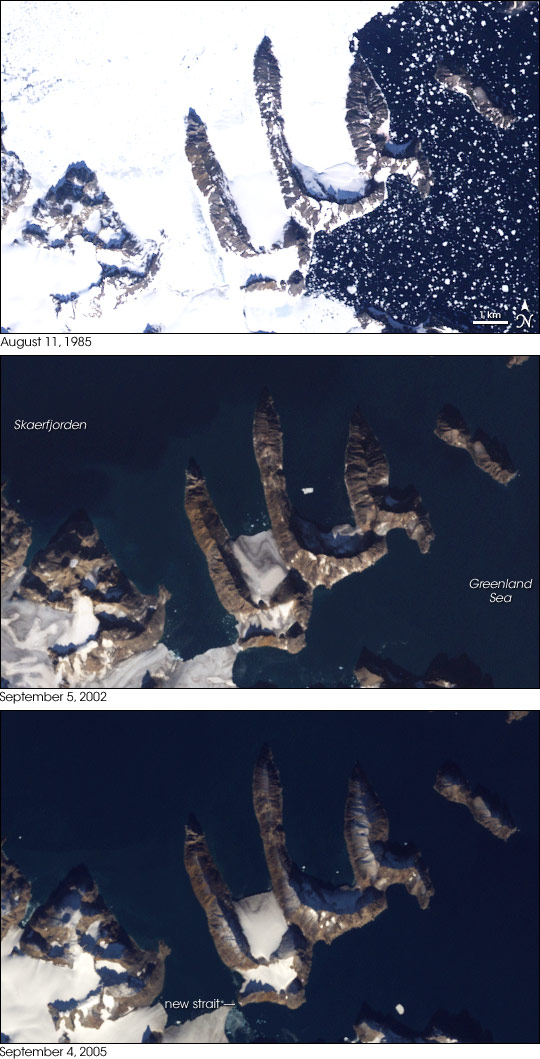 Off the coast of Greenland lies an island resembling a bony claw. Long connected to Greenland’s coast by ice, the island escaped recognition for what it was for nearly a century. The island might have been discovered when explorers such as Jean-Baptiste Charcot and Philippe, Duke of Orléans, mapped Greenland’s coast. Instead, this little island was only recognized as such in September 2005, by Dennis Schmitt, an explorer from Berkeley, California. Melting ice enabled Schmitt to detect the island while flying over northwestern Greenland.

This series of images shows observations of the newly discovered island taken by NASA Landsat satellites. Landsat 5 acquired the top image on August 11, 1985. Landsat 7 acquired the middle image on September 5, 2002, and the bottom image on September 4, 2005, the same month that Schmitt detected the island in his flyover. In the 1985 image, ice hugged the northern edge of the island and extended well to the north. In the 2002 image, the ice had retreated substantially, just a few remnants remaining in the southeast. The 2005 image showed something new, a strait between the claw-shaped island and mainland Greenland, confirming Schmitt’s discovery.

As reported by The New York Times, when Schmitt consulted his map, it indicated a nunatak—a mountaintop peeking above an icecap—in that area. Based on the differences he saw between his map and his new observations, he concluded that the surrounding ice had retreated at least 10 kilometers (6 miles) in the previous five years. Should ice around the coast of Greenland continue melting, more islands may emerge in areas once assumed to be peninsulas.

You can download a 28.5-meter-resolution KMZ file of the new island for use with Google Earth.