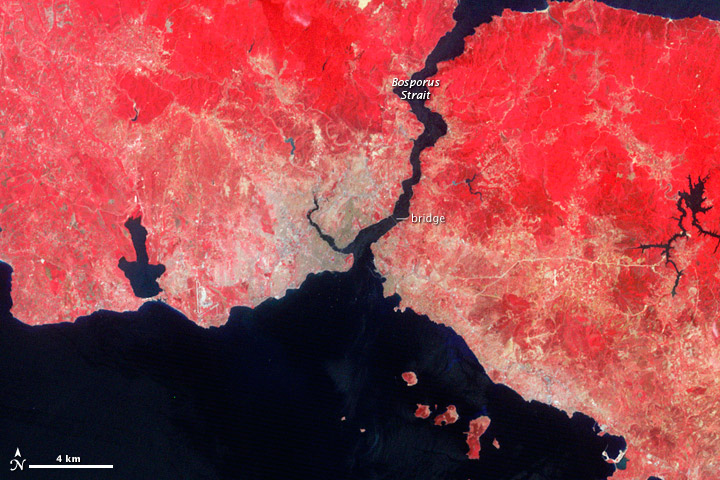 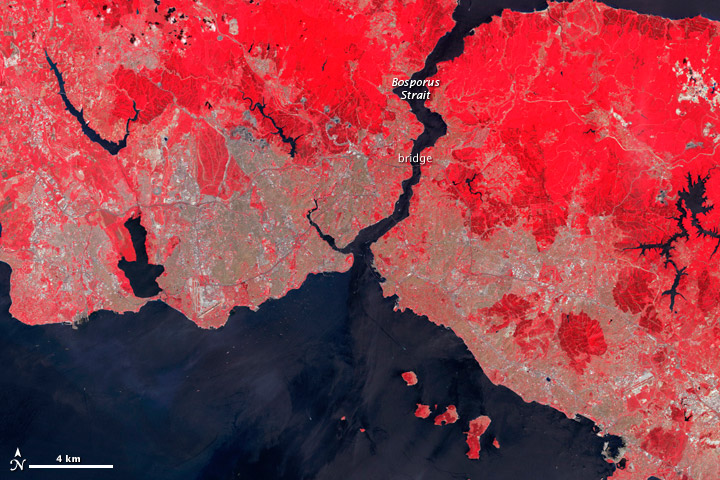 The rise and fall of empires is easy to read in Istanbul’s richly varied architecture. Stately 19th century wood townhouses are tucked in the shadow of the fifteenth century Ottoman palace. The late Roman or early Byzantine aqueduct of Constantinople cuts across the city center, a straight line across a skyline punctuated with minarets on mosques that are only centuries old. But as much as history has left its imprint on Istanbul’s make-up, modern civilization may have a far greater impact on its shape.

Istanbul has grown by more than 11 million people in the last 50 years, and the city has expanded to accommodate its new population. This pair of images contrasts Istanbul’s size in 1975 to its size in 2011. Both images come from the Landsat series of satellites and show the city in false color. Plant-covered land is red, while urban areas are gray. Lightly vegetated land or bare earth is tan, and water is black.

In 1975, Istanbul was still centered around the Golden Horn, the estuary that flows southwest into the Bosporus Strait. By 2011, the city had expanded over many kilometers to the east and west, and a new reservoir is visible to the west. Istanbul housed more than 13 million people by the end of 2011—18 percent of the population of Turkey. Much of Istanbul’s growth is happening as people move to the city for industrial jobs.

The images reveal some interesting patterns of growth. In 1973, the first bridge across the Bosporus opened, connecting the Asian side of Istanbul to the European side. The bridge is faintly visible in the 1975 image, and the urban areas in the newly connected east are near the bridge. In 1988, Istanbul opened a second bridge across the Bosporus. Farther north, this bridge is visible in the 2011 image. Not surprisingly, the dark gray of dense settlement has filled in the area between the two bridges on both sides of the strait.

This modern sprawl may be nothing new for Istanbul. Archeologists recently identified a wealthy port city some 13 miles west of Istanbul that was operating during the fourth to sixth centuries, during the founding of Constantinople. Though the find is new and not well understood, the city may have acted as a satellite harbor and retreat for the wealthy of Constantinople. The city appeared to have been abandoned after an earthquake flattened it in 1037.