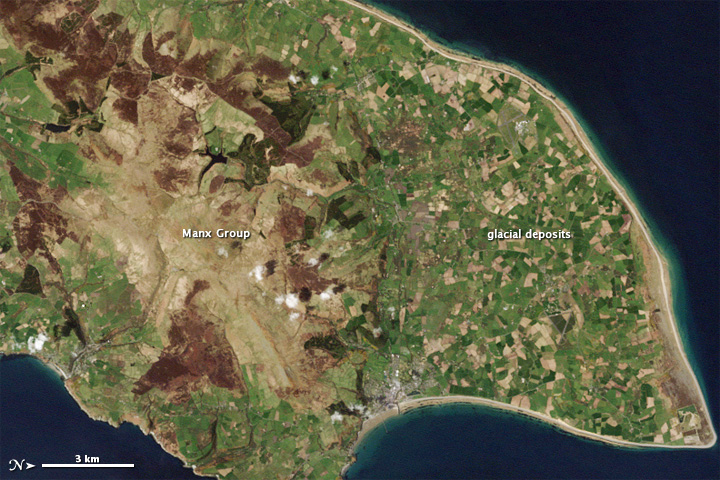 Located midway between England and Northern Ireland, the Isle of Man is a small island with a complex history. Geologists have studied and reported on the Isle of Man since the nineteenth century, making it a popular destination for rock hounds.

Roughly 50 kilometers (30 miles) from northeast to southwest, the island preserves rock layers dating back hundreds of millions of years. While most of the rocks are covered by soil, some rock layers exposed at the surface, along the coast, and in quarries have shed light on this island’s assorted ancient landscapes.

The Enhanced Thematic Mapper on the Landsat 7 satellite captured this natural-color image of the Isle of Man on May 1, 2001. This image shows the northern end of the island, and the image has been rotated so north is to the right. Croplands cover the relatively flat terrain of the northern coastal plain, which forms a rough triangle. Underlying the fields are glacial sediments. Between 70,000 and 10,000 years ago, a giant ice sheet covered the Isle of Man. The ice advanced and retreated multiple times, occasionally piling up rocks to form hills. As the ice melted, all the dirt and debris locked within it came to rest on the northern plain.

Toward the south, the land rises. The rock layers in this region are collectively known as the Manx Group, and they are far older than the glacial sediments coating the northern plain. These rock layers formed between 490 million and 470 million years ago at the bottom of an ancient sea floor. Normally sediments accumulate on the sea floor gradually. But occasionally underwater avalanches, perhaps prompted by earthquakes on land, can rapidly deposit huge amounts of sediment. Over thousands and thousands of years, layers of mud deposited in this way form submarine sediment fans.

When the Manx Group formed, Isle of Man lay far south of the Equator. Over hundreds of millions of years, the action of plate tectonics both raised the ancient submarine fan above the ocean surface, and carried it northward to its present location. Traveling through the tropics, what became the Isle of Man accumulated limestone and experienced volcanic activity. While we usually think of volcanoes erupting on land, volcanoes often erupt underwater, a process that continues today.

The Manx Group makes up the bulk of the Isle of Man, and comprises a mixture of sedimentary and volcanic rocks, folded and faulted by millions of years of tectonic pressures. Visible from the sky, the uneven contours of these rock layers hint at their complicated history.