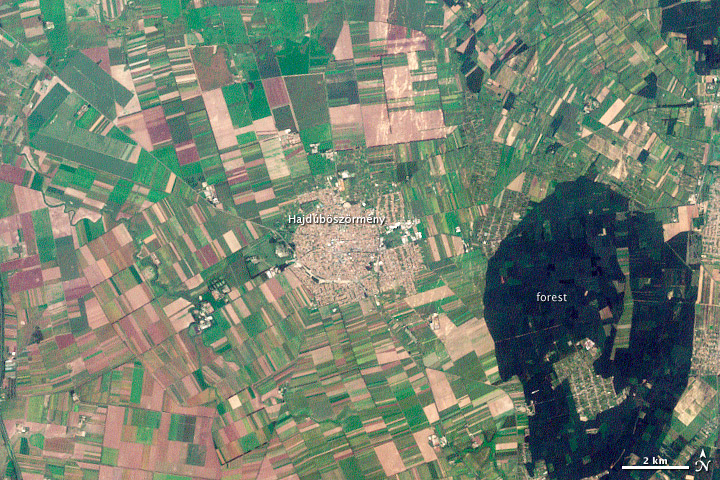 The history of Hajdúböszörmény, Hungary, echoes across its name and over its outline on the land. Now a city of 32,000, Hajdúböszörmény was settled in prehistory. The term “böszörmény” refers to a Turkish-Bulgarian ethnic group who may have been its first settlers. “Hajdú” refers to the cattle-driving population of the plain who became soldiers in the 16th century. To reward the Hajdú (or Haiduk) soldiers for defeating the Hapsburg Emperor, the Prince of Transylvania allowed the soldiers to settle in Böszörmény with the freedom of self-government.

This history is reflected in the shape of modern Hajdúböszörmény, as shown in this image taken by the Landsat 7 satellite on August 19, 2002. The city is round, a shape easily defended on the flat North Pannonian Plain in northeastern Hungary. The livestock-based economy may also play a role in the shape of the city. The center is densely built, a concentrated ellipse of tan and white. Surrounding the center is a slightly less dense circle, marked by diagonal roads, which held stockyards and gardens. Even today, tiny spots of green indicate that this area contains more open garden space than the city center.

Agricultural fields radiate away from the well-defined outer boundaries of the town. Small fields near the town were traditionally plowed fields for crops or hay. Larger fields lie beyond, and these have historically been pastureland.