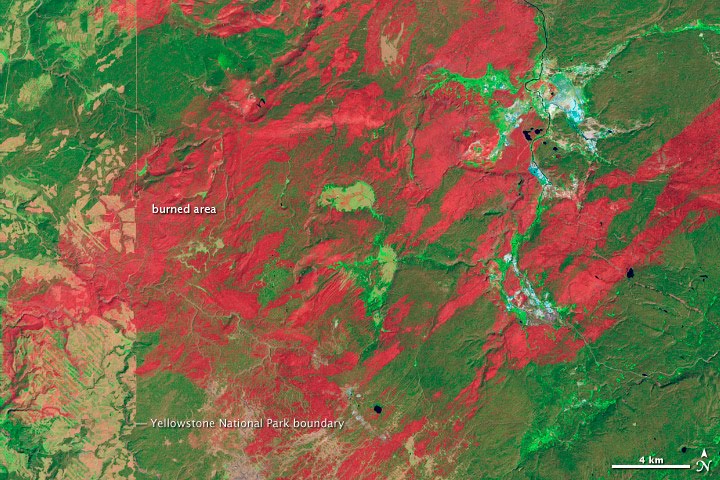 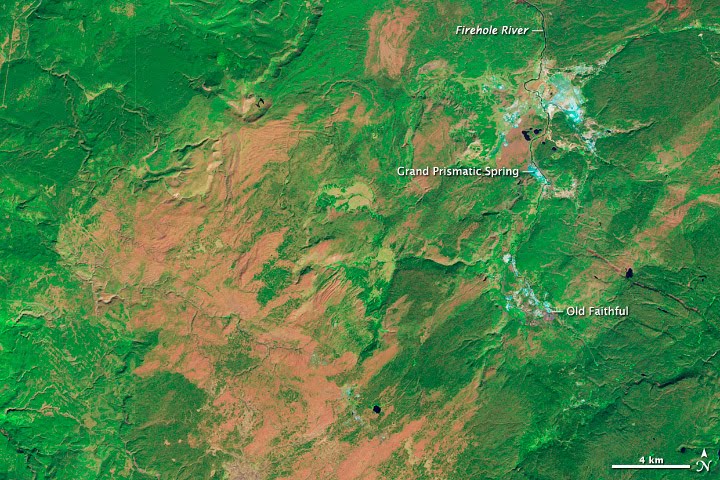 Fire and the Future of Yellowstone

The high mountain forests of western North America need fire. Fire returns nutrients to the soil and replaces old stands and ground debris with young forest. Intense fires are a characteristic of the conifer forests, though they occur infrequently—once every 100 to 300 years.

The year 1988 brought one of those infrequent, severe fires to Yellowstone National Park. Drought and high temperatures combined to create extreme fire conditions. Fifty wildfires ignited, seven of which grew into major wildfires. By the end of the year, 793,000 acres had burned.

These images, taken by the Landsat satellites, contrast 1989 and 2011. Burned land is deep red in the 1989 image. By 2011, more than two decades later, the scar faded to tan-orange, but it was still present. Year-to-year images are available in the Earth Observatory’s World of Change article, Burn Recovery in Yellowstone.

Immediately after the fire, grass flourished in the ash-rich soil, followed by young trees. The slender saplings were still not dense enough to hide the burn scar. As these images indicate, it takes many decades for a conifer forest to recover to pre-fire conditions.

Western conifers burn when temperatures are high and plants and soil are dry. Such conditions will come together more frequently as the climate changes over the next century, and fires are already becoming more frequent. A 2011 study combined several climate models to estimate how fire could change in the Yellowstone ecosystem. Yellowstone is near a tipping point, the researchers assert, as warmer, dryer conditions will likely allow large fires to burn as frequently as every 30 years.

When fires occur infrequently, the forest has time to recover. More frequent fires, however, give the conifers little time to grow back. If this occurs, Yellowstone could lose its dense conifer forests and replace them with low montane woodland and grassland by 2050.