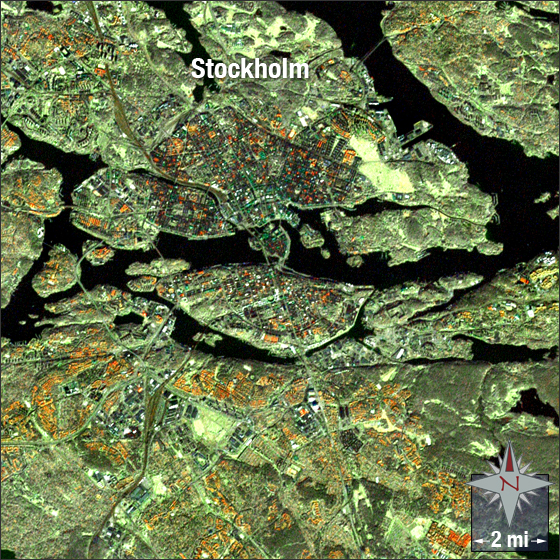 The city of Stockholm located on the east cost of central Sweden has a long history. Stockholm was originally known as Agnafit in Norse stories (sagas). The name Stockholm dates from 1252, when it became an important site in the iron trade. Stockholm is the capital and largest city of Sweden with an estimated population of 851,155.

In this image Stockholm appears tan, grey, and red. Water is black and vegetation is green.

This Landsat 7 image was acquired September 24, 2000. It is a true color pan-sharpened image using ETM+ bands 3, 2, 1 and the panchromatic band. The addition of the panchromatic band sharpens the spatial resolution of the image (to 15m/pixel), but can effect the color quality; notice that the greens looks somewhat â€œmintyâ€ and the city appears more â€œbejeweledâ€ than it would without the pan-sharpening process. Stockholm falls on Landsat WRS-2 Path192 Row 19.