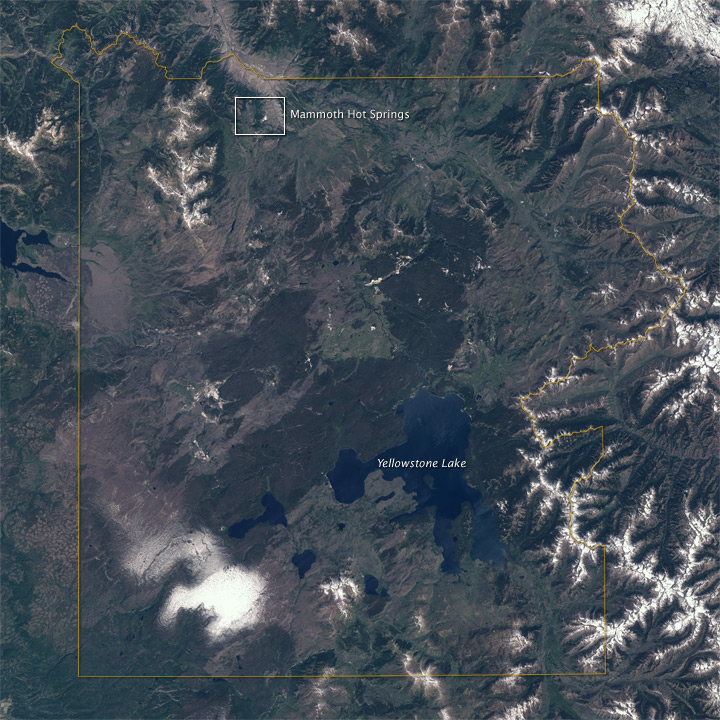 Yellowstone National Park sits atop vast, ancient, and still-active volcanic plumbing. Heat radiates off of an underground magma chamber, fueling Yellowstone’s ten thousand hot springs, mud pots, terraces, and geysers. But some proposed energy projects just outside the park’s borders have some people fearing that Old Faithful and other wonders could be sapped of their energy.

“If geothermal development outside of the park begins,” says researcher Rick Lawrence of Montana State University, “we need to know whether it’s going to cause Old Faithful to suddenly stop spewing.”

The top image above is a natural color view of Yellowstone, captured on July 13, 1999, by the Enhanced Thematic Mapper Plus (ETM+) on the Landsat 7 satellite. The borders of the park—which stretches between Wyoming, Montana, and Idaho—are marked in yellow. The white box marks the Mammoth Hot Springs, which Lawrence and Montana State colleague Shannon Savage have been studying closely with satellite and airborne tools.

The lower series of maps depicts the heat content they found in Earth’s crust beneath Mammoth Springs, as observed by the heat-sensitive channels on ETM+ and on the Thematic Mapper on Landsat 5. The energy level broadly rises (becoming a deeper red) in the 1980s to late 1990s to a peak in 2000, followed by subsiding through the 2000s. The bottom map shows several measurement sites from throughout the park in 1999. 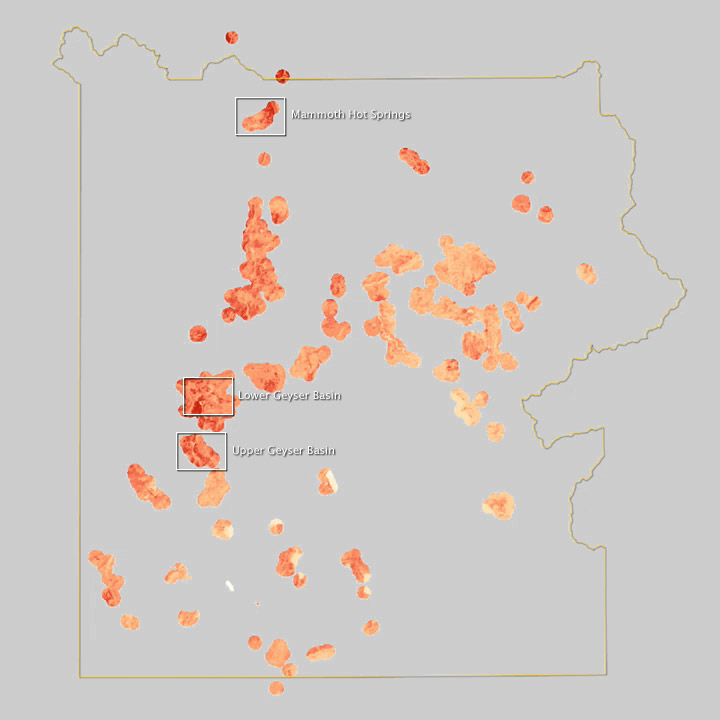 Earth’s crust radiates heat because it is warmed by the Sun—the ground absorbs solar energy, and then reemits some of it back into space at longer wavelengths. Landsat and other satellites can detect some of these emissions. But in Yellowstone, the total emissions include energy produced by the Earth itself, or geothermal energy.

To estimate changes in the geothermal system, Lawrence and Savage selected one image per year from 1986 to 2007 (with a few gaps due to cloud cover) and subtracted the average solar heat reflected and emitted from the land surface over the study period. They were left a broad view of the energy coming from geothermal changes, which they compared to specific geothermal events from the time period.

Minerva Terraces was the site of one such event. In 1998, mineral-rich, near-boiling water bubbled over Minerva’s broad steps, depositing calcite on the face of each terrace. Heat-loving organisms colored the white surface pink, yellow, and green. But a year later, the Terraces were abandoned. “There was no steam, no color, and the formation started crumbling away because it was very soft calcite,” says Savage.

Minerva’s colorful ecosystem—which lies within the wider Mammoth Basin area—collapsed because the hot water stopped flowing. The subsidence appears to be reflected in the changes shown in the maps above.

The new research gives scientists clues as to how geothermal events may or may not be connected underground. If two wide areas change in similar patterns and time frames, they might share the same plumbing. For example, the Norris Geyser Basin and Mammoth Hot Springs were long thought to be connected. But Lawrence and Savage did not find any common trends in the two sites, suggesting that they may not be connected.

Looking to the geothermal energy developments, scientists may be able to monitor whether there are connections between activities outside the park and the natural monuments inside the park.