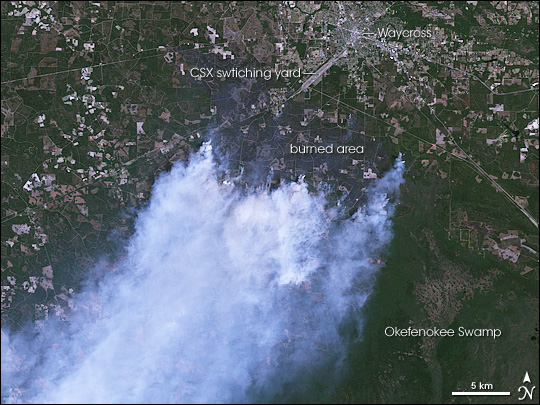 Dense plumes of blue-white smoke billowed from the Sweat Farm Road Fire in southern Georgia on April 19, 2007, when the Landsat 5 satellite captured this detailed image. The fire started on April 16, when a tree fell on a power line and, fanned by strong winds, quickly exploded into a major fire. By April 19, the fire had forced officials to close several roads, including U.S. Highway 1, and to evacuate hundreds of people from the perimeter of the city of Waycross, the silver cluster along the top edge of the image. The nearness of the fire is evident in the dark brown, charred land just south of the city. The active fire front is along the south edge of the burned area, where the flames are eating into the dark green hardwood forests, pine plantations, and shrubs in Okefenokee Swamp. Because of the difficult terrain, the fire and the adjoining Big Turnaround Complex fire are expected to burn until significant rain falls, said the morning report issued by the Southern Area Coordination Center on May 4.

“In the long term, the burning of the swamp will ultimately benefit the swamp wilderness habitat, which is a fire-dependent ecosystem,” said a press release issued from the Okefenokee National Wildlife Refuge on May 4. Such ecosystems require fire to remain healthy. In the case of southern pine forests, many pine species need fire to remove litter from the ground and release soil nutrients so that new seedlings can grow.