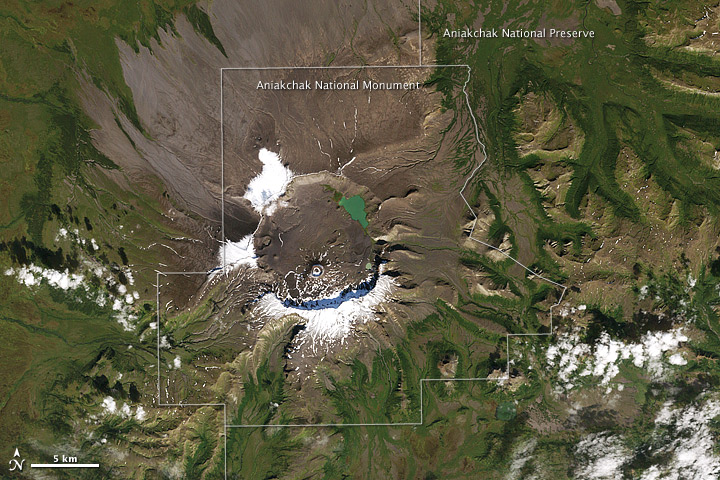 Aniakchak National Monument and Preserve derives its name from a 6-mile (10-kilometer) wide caldera that sits midway down the Alaskan Peninsula. Geographers first noticed the circular feature on the landscape, and a 1922 geologic expedition confirmed the origin of the depression. Several decades later, paleontologists made another find at Aniakchak: Dinosaurs once lived in the area, and they left behind some of their fossilized tracks.

Aniakchak is one of 232 American parks with a stash of fossils. The National Park Service provides information on these natural relics as part of its celebration of National Fossil Day (October 12) and of Earth Science Week.

The Enhanced Thematic Mapper Plus on the Landsat 7 satellite captured this natural-color image of Aniakchak National Monument and Preserve on September 15, 2000. The caldera dominates the view, and the southern rim casts a blue-gray shadow on nearby snow and ice. (Because of the angle of sunlight, this image may cause the optical illusion known as relief inversion.) A lake lies near the caldera’s northeastern margin. Vegetation is scarce immediately around the caldera, but farther away the slopes are green.

The caldera formed about 3,500 years ago when an explosive eruption blew out roughly 3,000 feet (1,000 meters) of overlying mountain. More recent volcanic activity has pockmarked the caldera with cinder cones and lava flows.

The dinosaur tracks in Aniakchak are far older than the crater. They were left by plant-eating dinosaurs about 70 million years ago. Anthony Fiorillo, based at the Museum of Nature and Science in Dallas, discovered the tracks and wrote about them in 2004. Left by hadrosaurs, the tracks consist of smaller handprints and larger footprints.

Most people think dinosaurs lived in tropical, or at least temperate, environments—not at high latitudes such as Alaska. So how could dinosaurs thrive so far north?

Plate tectonic theory indicates that some lands that are now situated at high latitudes once rested nearer to the equator. So one explanation could be that the landform wasn’t in the same place when the tracks were formed. However, studies of rock layers from the area indicate that the Aniakchak area was already in place at about the same latitude 70 million years ago.

Though Aniakchak was in roughly the same place (almost 57 degrees north), it doesn’t mean that it had the same climate. In fact, global climate about 70 million years ago was significantly warmer than today. So dinosaurs did not have to endure the temperatures common in modern Alaska, although they did experience some cold conditions and possibly snow.