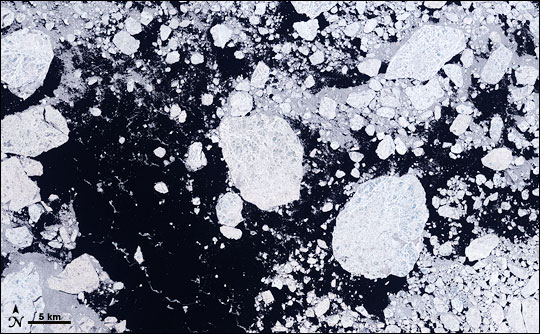 For many years, scientists have expected that climate change will be more rapid and dramatic at the poles than at lower latitudes, an expectation that has been demonstrated both with climate models and recent observations of snow and ice, surface temperatures, vegetation, and permafrost. The major reason for this polar amplification of climate change is because snow and ice aren’t just the result of a cold climate, they also help create it.

The path by which snow and ice influence the climate is obvious in this detailed, photo-like image of Arctic sea ice, captured on June 16, 2001, by NASA’s Landsat-7 satellite. Sea ice is spread across the nearly black backdrop of the Arctic Ocean in a broken mosaic. Large blocks of ice swirl against finely crushed ice that looks almost like foam. The dark ocean surfaces absorb incoming sunlight, while sea ice reflects it. A cooling climate increases snow and ice, which increases solar reflection, leading to more cooling. Warming climates cause snow and ice to melt, which increases solar absorption, leading to more warming.

Steady declines in Arctic sea ice over previous decades—and especially rapid declines since around 2000—caused Seiji Kato, an atmospheric scientist affiliated with NASA’s Langley Research Center through Hampton University, to wonder whether the recent losses were already dramatic enough to have changed the percent of incoming sunlight the Earth reflects back to space. This planetary “vital sign” is known as Earth’s albedo. To answer the question, Kato and several teammates compared a suite of NASA and NOAA (National Oceanic and Atmospheric Administration) satellite observations of reflected sunlight, clouds, and sea ice and snow cover at polar latitudes from 2000-2004. What they found was a bit of a surprise: while snow and ice in the Arctic declined, the albedo didn’t change. To read more about the team’s investigation, read the Earth Observatory feature story Arctic Reflection: Clouds Replace Snow and Ice as Solar Reflector.

NASA image by Robert Simmon, based on Landsat-7 data from the Global Land Cover Facility.