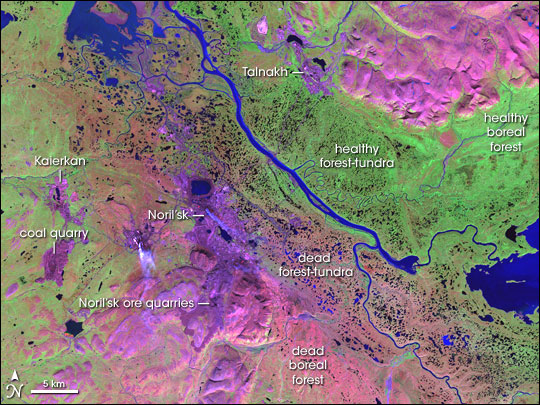 The Russian city of Noril’sk lies in Siberia at the western edge of the Putorana Plateau roughly 300 kilometers (180 miles) north of the Artic Circle. This city of 230,000 people has only one reason for existence in this isolated location: mining. Today, most ore comes from deep underground mines. The metals in these ores are mostly in the form of sulfur compounds. Processing the ore creates sulfur dioxide, which is vented into the air via smokestacks. By some estimates, 1 percent of the entire global emissions of sulfur dioxide comes from this one city. The release of sulfur dioxide, a source of acid rain, has created a legacy of environmental damage to the vegetation and waters in the area.

This false-color image shows data collected by Landsat 7’s Enhanced Thematic Mapper Plus (ETM+) instrument on August 9, 2001. Shades of pink and purple indicate bare ground: rock formations, cities, quarries, and places where pollution has damaged the vegetation. Brilliant greens show predominately healthy mixed tundra-boreal forest. Water appears in shades of blue. The Noril’skaya River cuts through the scene, and the forest-tundra terrain on either side is riddled with small “pothole” lakes.

Blue-white plumes of smoke (just left of image center) drift southeastward from smokestacks in Noril’sk. The deep and pale pinks downwind of the city, as well as the deep purple in the hillsides immediately outside Noril’sk, are moderately to severely damaged ecosystems. To the northeast of the river, the ecosystems appear healthier. A large coal quarry, one of the sources of electricity in Noril’sk, appears as a purple patch south of the city of Kaierkan.

Noril’sk has a long history of mining. Major nickel deposits were discovered in the area during the 1920s. Now virtually all of Russia’s platinum group metals (platinum, palladium, and rhodium), most of the country’s nickel, and more than half its copper come from mines in and around the city. Sandstone, limestone, and dolomite are also mined for use in processing the metal ores.