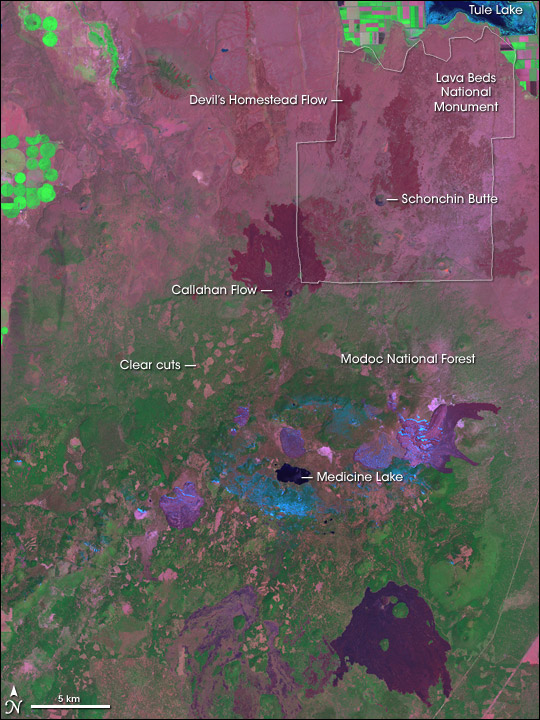 Lava Beds National Monument sits just a few miles south of the border between Oregon and California and within sight of Mount Shasta in the Cascade Mountains. Like Craters of the Moon National Monument in Idaho, it is a recently formed (geologically speaking) set of basaltic lava flows, creating a foreboding landscape of sharp obsidian, cinder and spatter cones, twisted rivers of solidified rock, pit craters, and a network of caves from lava tubes. Indeed, so daunting is this landscape that a group of 53 fighting men and their families from the Modoc tribe holed up in the lava tube complex now known as “Captain Jack’s Stronghold” while holding off nearly ten times their own number from the U.S. Army for several months during the 1872-73 Modoc War. The significance of the site in this war was one of the primary reasons for its designation as a National Monument in 1925.

This Landsat 7 false-color image shows not only the small National Monument, but the wider area around it. The scene is roughly centered on the Medicine Lake shield volcano that created the basaltic lava flows roughly 500,000 years ago. Medicine Lake marks the approximate summit of the volcano. The sides of the mountain are covered in forests that are part of the Modoc National Forest, which surrounds the National Monument on three sides. The northern side, along Tule Lake, is bracketed by the Tulelake National Wildlife Refuge. In this false-color image, water features like Medicine Lake appear dark blue. The summit region of the volcano is lightly dusted with snow, which appears pale blue here. Bare land is pink, forests are deep green, and agricultural land appears bright green. The checkerboard of pale pink and deep green along the northwestern slopes of the volcano are clear cuts within the national forest: all the trees are harvested in one area, surrounded by uncut forest. Flowing patterns in various shades of deep red and burgundy are lava flows.

Lava Beds National Monument has several flows within or along its boundaries. The area beyond the boundaries of the monument also has many of these distinctive formations. Other apparent features include small cinder cones, which appear as round dots poking up from the landscape. Schonchin Butte inside the monument is one of the most distinct cinder cones in the image, with a summit roughly 200 meters (660 feet) above the local plain. A great many other such small volcanic cones are scattered across the landscape both within and beyond the monument’s borders. The circular, bright green features are fields watered by center-pivot irrigation devices, a common water-conserving method of irrigation used in the western United States. The large-format image shows a wider area around the monument and Modoc National Forest, including the snowy peak of nearby Mount Shasta.

These data were collected by Landsat 7’s Enhanced Thematic Mapper Plus (ETM+) instrument on June 14, 2001. The image was created by combining data from the sensor’s shortwave-infrared, near -infrared, and green channels (ETM+ bands 7, 4, and 2 respectively).