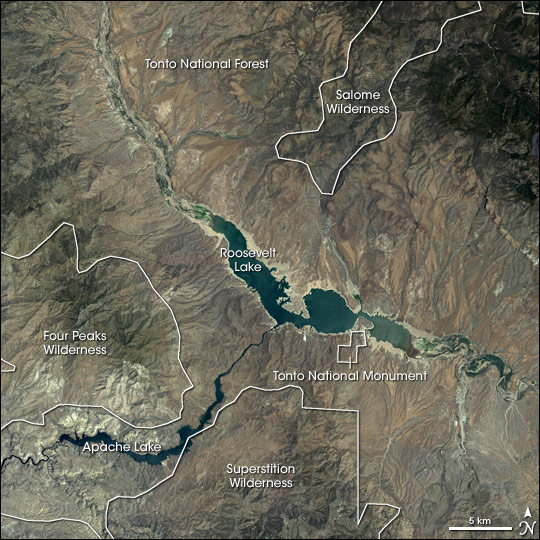 Tonto National Monument lies in the midst of the Tonto National Forest near Phoenix, Arizona. The area lies on the northeastern edge of the Sonoran Desert, which is generally extremely arid land with annual rainfall of only around 50 centimeters (15 inches). The Salt River runs through this area, providing a rare, year-round source of water. The river attracted settlers known as the Salado during the 13th, 14th, and 15th centuries, but sustained drought eventually drove them from the valleys here. Cliff dwellings and cave homes can be found in the National Monument dating from the Salado settlement years. Sonoran desert vegetation grows in the area, including the emblematic saguaro cactus, as well as cholla, yucca, and agave cactus, mesquite trees, native wildflowers, and creosote bush.

This Landsat image shows area surrounding the National Monument. The most striking feature is Roosevelt Lake, an artificial lake created by the construction of Roosevelt Dam across the Salt River. The reservoir generates electricity, reliable irrigation supply for agriculture, and provides for recreation. The National Monument is surrounded by the Tonto National Forest, which includes low plains, desert scrubland, and alpine pine forests. Tonto National Forest is the fifth large national forest in the United States. The area around Tonto National Monument also includes several designated Wilderness Areas, including Four Peaks, Superstition, and Salome Wilderness Areas.. The second smaller lake also visible in this satellite image is Apache Lake. In this natural-color image, the alpine forests of pinyon and juniper trees are a deep, dark green, while the relatively barren desert terrain along lower elevations appears dark brown or grey. Pale greens along the floor of the valleys leading into Roosevelt Lake shows where vegetation has taken root. Pale blue patterns in the lake highlight shallow areas. The white rim around the lake in some places is land which had been underwater recently, but was revealed as the lake level dropped from summer water use. The large-scale image shows the wider area around the National Monument including neighboring parks, forests, farmland, and the city of Phoenix.

This image was created from data collected by the Enhanced Thematic Mapper Plus (ETM+) instrument on the Landsat 7 satellite. The images combine red, green, and blue wavelengths (ETM+ bands 3, 2, and 1). The data was acquired on June 15, 2000.