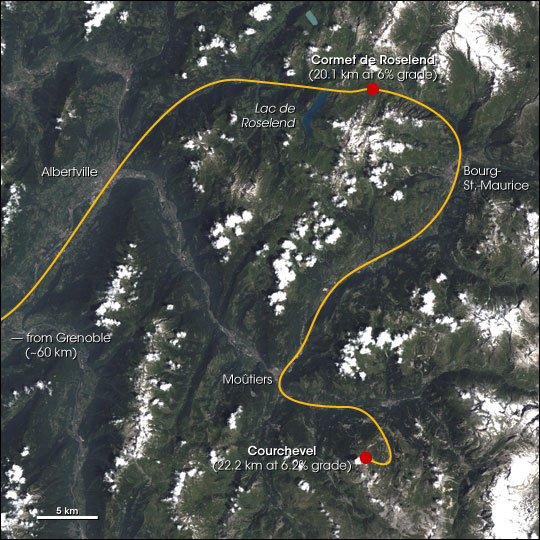 As the riders of the 2005 Tour de France bike race gasp across the finishing line on the mountaintop at Courchevel, France, at the end of the race’s 10th stage on July 12, 2005, they probably won't want to think about the fact that even with the grueling 192.5 kilometers (119.6 miles) they put in that day, they are not quite half way through the famous race’s 3,607-kilometer (2,241-mile) circuit around the country.

This Landsat satellite image from July 30, 2001, shows the terrain in southeastern France along the route (yellow line) of the first mountain stage of the 2005 race. The summits of the stage’s two big mountain climbs are marked with red circles. Stage 10 begins in the town of Grenoble, at an altitude of 220 meters (722 feet) and finishes at an altitude of about 2,000 meters (6,562 feet) in Courchevel in the western Alps. But the 1,780 meters (5,840 feet) between start and finish isn't the only climb the racers have to face.

The route follows the Isère River northeastward out of Grenoble until it reaches Albertville. There, the route takes temporary leave from the Isère River for a side trip to the summit of Cormet de Roselend, which at 1,967 meters, is virtually as high and nearly as steep as the ascent to Courchevel. The riders will drop down from that first mountain back to the Isère River at Bourg-St-Maurice. By the time they reach Moûtiers, they will have returned to an elevation of 495 meters, where they will be staring into the face of the giant mountain called the Massif de la Vanoise. The route finishes at the ski town of Courchevel on the north face of the Massif.