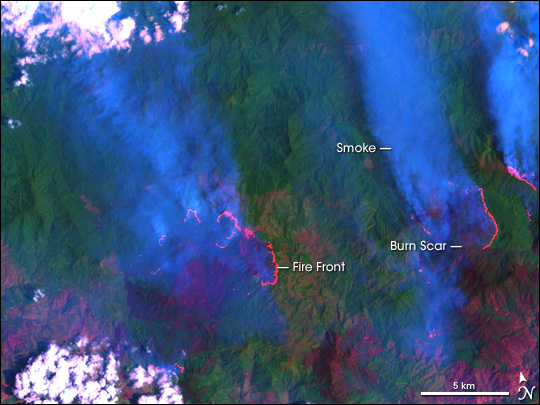 Since March 14, 2005, at least two large fires have been burning in the Cordillera Central, the mountains that run down the spine of Hispaniola. The fires started in the Jos del Carmen Ariza National Park, on the lower reaches of Pico Duarte, the highest mountain in the Dominican Republic. The flames raced up the mountain, consuming the pine, palm, and broadleaf rainforests that grow at higher elevations. Local news reports say that more than 700 people have gathered to fight the flames, and the government is requesting firefighting airplanes from the United States.

The fires were still burning when Landsat 7 ETM+ captured this image on March 21, 2005. The newly burned mountain slopes are dark brown, while unburned forest is green. The image is a false color image (opposed to a photograph-like image) created from light in the shortwave infrared, near infrared, and green wavelengths. The hot fire fronts glow red in the infrared bands, revealing the extent of the active fire on March 21. Thick smoke, tinted blue in this image, rises from the fires.

The highest elevations of Pico Duarte where the fires are burning are covered with rare mountain cloud forests, rainforests that draw water from the clouds. Because the forests can take water directly from the sky, they play an important role in providing water to the Dominican Republic, particularly during the dry season, which runs from December to May. The headwaters of 17 of the country’s rivers can be found in the Cordillera Central. These rivers are used for drinking water, irrigation, and to produce energy.

In March 2005, the forests have been particularly prone to large fires. An unusually severe dry season dried the vegetation on Hispaniola, making the region susceptible to fire. Officials don't know how these fires started, but dry weather has probably contributed to the severity of the fires.