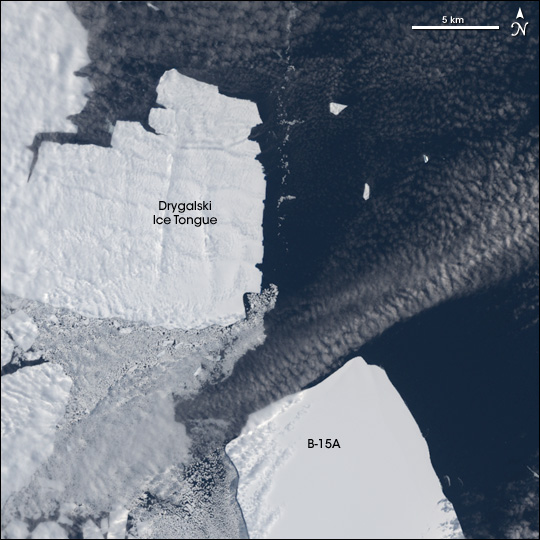 In early January 2005, it appeared that the B-15A iceberg was on a collision course with the Drygalski Ice Tongue, the floating portion of a glacier flowing off the Scott Coast of Antarctica and into the Ross Sea. Scientists and amateur Earth-observers checked satellite images of the region each day to monitor the northward march of the berg and to witness the impacts. Would it be just a fender bender, or would the ice tongue shatter under the impact of the oncoming berg?

In mid- to late January, however, the berg’s forward progress was arrested. After coming within just a few kilometers of collision, the big berg appears to have run aground in the shallow coastal waters and is no longer headed for Drygalski. This image, captured on January 21, 2005, shows just how close the two icy giants came to each other. At upper left is the tip of the Drygalski Ice Tongue, while at bottom is the northernmost portion of the B-15A iceberg. The distance between them was less than 5 kilometers on this day.

The ice tongue and the iceberg have created something of a corral for the seasonal sea ice, which by this point in the season often would have already broken up and drifted away into the Ross Sea. Trapped sea ice is visible in the lower left corner of the scene. The parent iceberg of B-15A calved off the Ross Ice Shelf in 2000, and pieces of the berg have been influencing the circulation patterns in the region for several years.