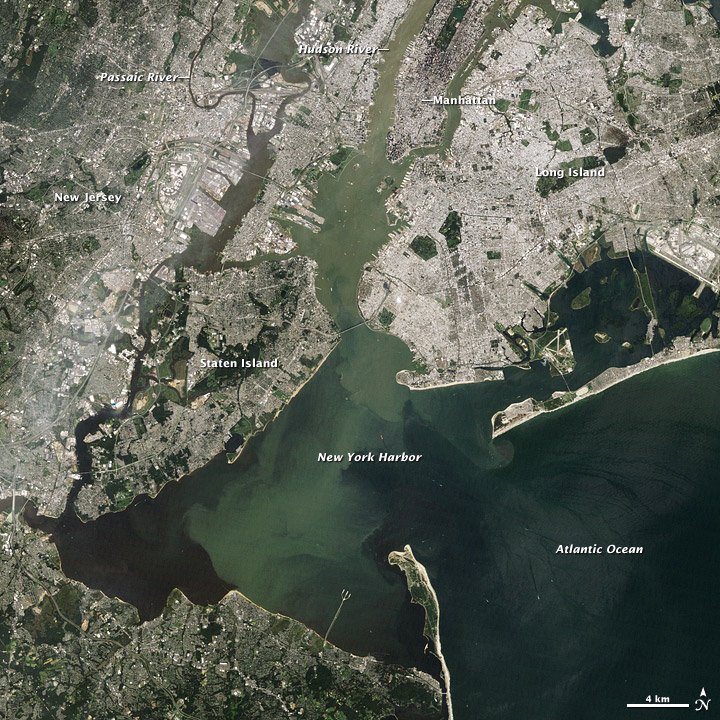 In the wake of heavy rains from Hurricane Irene, sediment filled many rivers and bays along the U.S. East Coast. New York’s Hudson River and estuary was no exception.

In this true-color satellite image, pale green and tan water flows past Manhattan and mixes with the darker waters of New York Harbor and the Atlantic Ocean. This image was acquired on August 31, 2011, when Landsat 5 acquired multiple views of the coast from the Carolinas to New York. Be sure to click on the full mosaic. Sediment plumes are prominent in Delaware Bay and along the Maryland, Virginia, and North Carolina coasts. Also, the Delaware, Hudson, and other rivers stand out as tan and brown tracings far into the interior landscape.

“The sediment flux from Irene is really massive...unusual, but not unheard of,” said coastal oceanographer David Ralston of the Woods Hole Oceanographic Institution. “One big event like this can move and deposit as much sediment as you might get in several years of regular flow on the Hudson.”

In the scene above, fresh water of the upper Hudson has likely pushed all the way down near Manhattan, Ralston notes, in an estuary where the saltwater mix can extend more than 100 kilometers into upstate New York. Tides and currents in the harbor send pulses of sediment-laden water into Raritan Bay (lower left), the Atlantic, and even up the East River into Long Island Sound.

The color of the water generally depends on the amount and type of sediment, as the green, tan, and deep brown areas have varying degrees of suspended silt, sand, mud, leaf tannins, and other organic matter. Note, for instance, the darker brown tinting near the Passaic River in New Jersey (image left). The brightness, or reflectance, of the water is also an indication of how close to the top of the water column those sediments are moving.

It is also possible that phytoplankton are blooming in the wake of the storm. Waterborne sediment can block some of the sunlight for aquatic plants, but the stirring of the river bottom and the runoff from land brings massive amounts of nutrients to the water's surface. The fresh water can stratify, or layer, the water column so that plankton can flourish at the surface without mixing downward.

In addition to soil and sand, flooding rivers can carry sewage, pesticides, and excess fertilizer. Researchers from the U.S. Geological Survey and other institutions are collecting samples to determine the amount of pesticides, fertilizer, E. coli and other bacteria, and sediment in the water. All can contribute to poor water quality and promote algae blooms that increase costs of treating drinking water. The movement of sediment also can affect coastal shipping channels.

After Hurricane Floyd struck in 1999, scientists used similar satellite data like the map above to map flood waters in North Carolina.