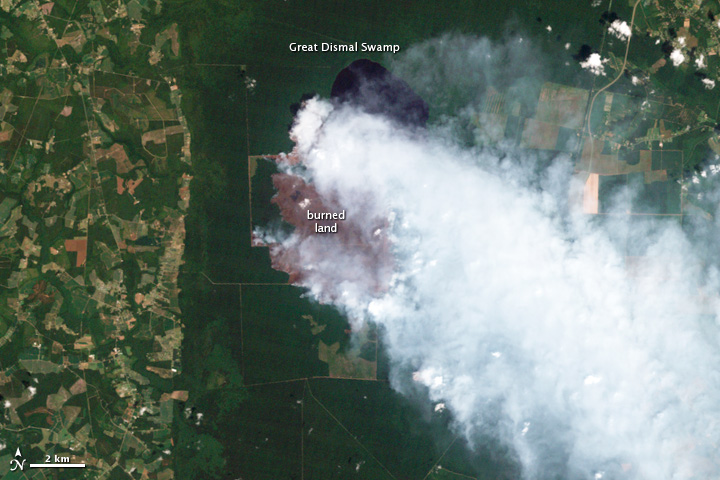 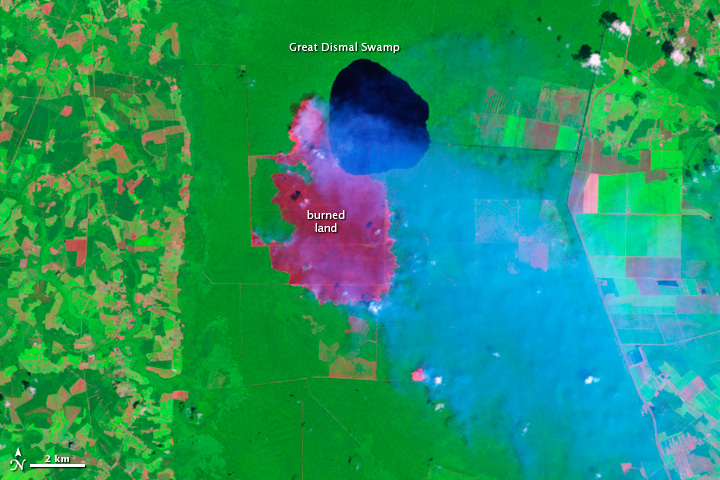 One of the potential benefits of Hurricane Irene may be to help extinguish a large fire burning in the Great Dismal Swamp. Lightning started the Lateral West fire on August 4, and it has since burned slowly through drought-stressed hardwood forest and dry peat soil. By August 26, the fire had burned 6,358 acres. The fire has produced dense plumes of smoke that have mostly blown over the Atlantic Ocean, but have also affected air quality as far away as Washington, D.C. The fire is hard to access and hard to control. Peat fires are very difficult to extinguish because they burn deep in the soil. Such fires often burn until rain puts them out.

These images of the fire, taken by the Landsat 5 satellite on August 15, 2011, show both the smoke and the fire’s inaccessibility. The top image is a natural color view of the fire similar to what the human eye would see. Smoke billows from the fire, which is burning near the center of the Great Dismal Swap. The swamp is a swath of uninterrupted green. Only a few roads, pan tan lines, segment the forest.

The lower image was made with both infrared and visible light. This view cuts through the smoke to uncover the fire’s extent. Newly burned land is dark red, and smoke is blue. Exposed earth outside the swamp is pink.

Located near the Virginia-North Carolina border, the fire was squarely in Irene’s path and had been forecast to receive eight to ten inches of rain from the storm. “Eight inches of rain will not put the fire out,” said Tim Craig, Fire Management Officer for the refuge. “It will buy us time to clear our way through the downed trees back to the fire zone after the storm.”

Irene generously drenched the swamp with 10 – 15 inches of rain, but initial assessments show that the fire is still burning. Before the storm, the Lateral West fire was 35 percent contained. Smoke still rose from at least 30 acres after the storm though open flames were no longer visible and the fire did not spread under Irene’s strong winds, said local news reports. The sudden flush of rain left puddles that are still soaking in to the soil and may yet help extinguish the fire. Firefighters and equipment were evacuated during the storm.