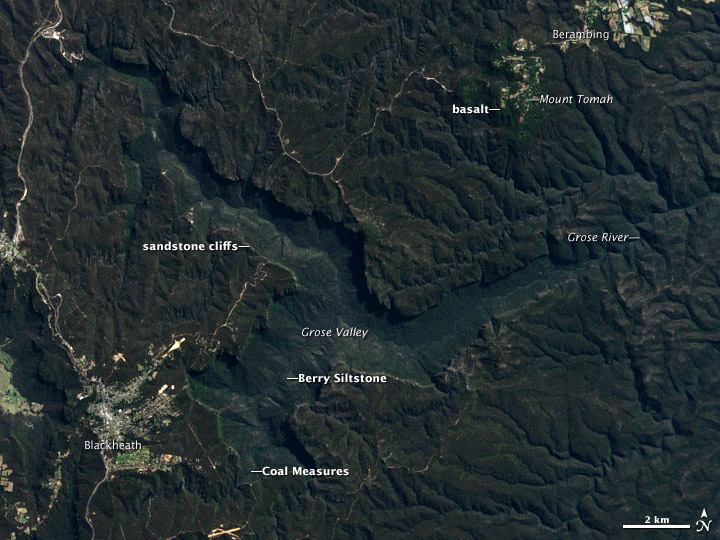 The Blue Mountains rise to a broad plateau not far west of Sydney, Australia. In the heart of the mountains lies the Grose Valley, bounded by sheer 300-meter (1,000-foot) cliffs. This dramatic landscape was sculpted by forces of erosion acting on the underlying geology; that is, characteristics of each rock type helped determine the topography.

This natural-color satellite image was acquired on September 13, 2000, by the Enhanced Thematic Mapper Plus (ETM+) on Landsat 7. Deep green forests, dominated by eucalyptus trees, cover the landscape. The light gray buildings of Blackheath lie just to the west of the valley (lower left), and the light green orchards and pastures surrounding Berambing are visible to the northeast (upper right).

Two main types of rocks make up the Grose Valley and the immediate surroundings: a young, thin layer of volcanic rock, and a thick sequence of sedimentary rocks, laid down by wind and water several hundred million years ago. Several distinct types of shale, sandstone, and siltstone appear in the sedimentary sequence, which comprises the bedrock in most of this image.

The topmost layer is comprised of basalt erupted 15 to 18 million years ago from an unknown source. Most of this basalt has eroded away, but some can still be found at high points like Mount Tomah. Soils in these areas support a unique ecosystem called Tableland Basalt Forest, which appears bright green in this image.

Directly beneath the basalt are Wianamatta Group shales, followed by the Hawkesbury Sandstone—which forms the cliffs along the Sydney coast, 100 kilometers (60 miles) to the east. These two rock layers are softer than the basalt above and the sandstone below, so they have mostly eroded away except where protected by a cap of basalt.

Beneath the Wianamatta Group and Hawkesbury Sandstone are layers of very hard sandstone called the Narrabeen Group. These 240 million-year-old sandstones resist erosion and form the sheer cliffs that surround Grose Valley. Softer shales and sandstones, the “Coal Measures,” underly the Narrabeen sandstones and make up the slopes visible beneath the cliffs. Coal and oil shales in these formations have been mined extensively.

At the base of the valley is Berry Siltstone, originally deposited on an ocean floor over 260 million years ago. The Grose River flows atop this siltstone, carrying freshly eroded sand grains eastwards to the ocean.