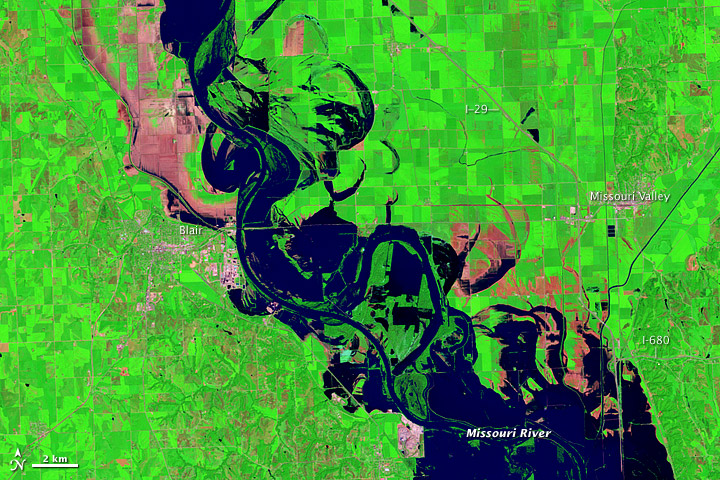 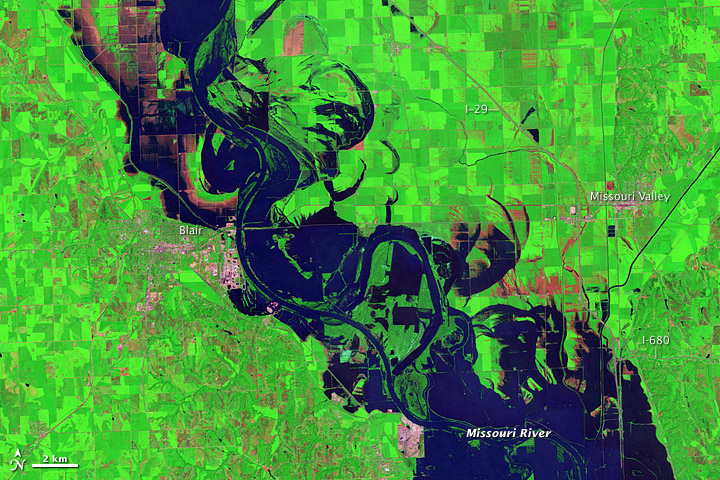 Flooding in the Missouri Basin

As August 2011 progressed, Missouri River flooding along the Nebraska-Iowa border receded, but only slowly. The Thematic Mapper on the Landsat 5 satellite captured these images on August 17, 2011 (top), and August 1, 2011 (bottom). They show the area around the city of Blair, north of Omaha, Nebraska.

These images use a combination of infrared and visible light to increase contrast between water and land. Vegetation is green. Water is navy blue. Bare ground is brick red, and this includes areas where water has recently retreated but vegetation has not yet recovered.

Both images show substantially flooded conditions, with water sitting on floodplains east and west of the Missouri River. Compared to August 1, however, August 17 shows significant recession of flooding, especially north of Blair. Agricultural fields that were under water weeks earlier are now drying out, but remain largely devoid of vegetation.

The Advanced Hydrological Prediction Service (AHPS) of the U.S. National Weather Service reported that the Missouri River crested near Blair on June 29, 2011, reaching a height of 32.73 feet (9.98 meters). This was the second-highest level recorded for Blair, after the record set in 1952. The AHPS noted, however, that the 2011 crest data were provisional and could change. As of 10:00 a.m. local time on August 23, 2011, the Missouri River reached 29.77 feet (9.07 meters), which was at moderate flood stage.