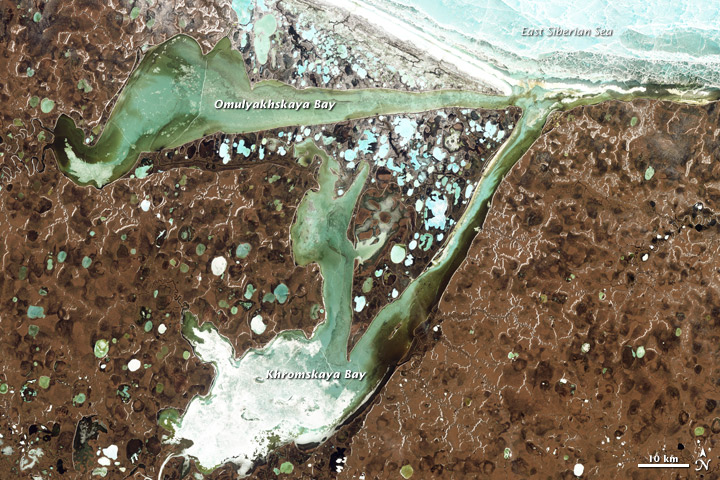 Omulyakhskaya and Khromskaya Bays lie along the northern Siberian coast, southeast of the Lyakhov Islands. The northerly location almost guarantees ice in the adjacent East Siberian Sea, and permafrost blankets the land around the bays. The Thematic Mapper on the Landsat 5 satellite captured this natural-color image on June 15, 2009, when ice lingered on the sea surface and on some inland water bodies.

The land around the bays is dotted with thermokarst lakes, which result from water released by thawing permafrost. Lacking drainage, the melt water accumulates, forming small lakes. Although far too cold for a pleasant dip, the water in these lakes is generally warm compared to the surrounding frozen ground. Because the beds of thermokarst lakes rarely freeze, they warm the ground underneath, generally keeping it from freezing. Known as talik, this unfrozen ground is softer than the surrounding permafrost. As water wears away at this relatively soft ground, the lake can deepen and expand over time.

The water in a thermokarst lake doesn’t always stay put; these lakes can melt through the surrounding permafrost and drain into a nearby water body, especially if it sits at a slightly lower elevation. This appears to have occurred in multiple lakes between the bays shown above. (The compound lakes are identifiable by their uneven margins.) Coastal erosion and river migration also can deplete the lakes. Dark brown spots, especially numerous east of Khromskaya Bay, are probably locations of former thermokarst lakes.

Because thawing permafrost and thermokarst lakes release carbon and methane—both greenhouse gases—scientists monitor these landscapes closely because of their implications for future climate.