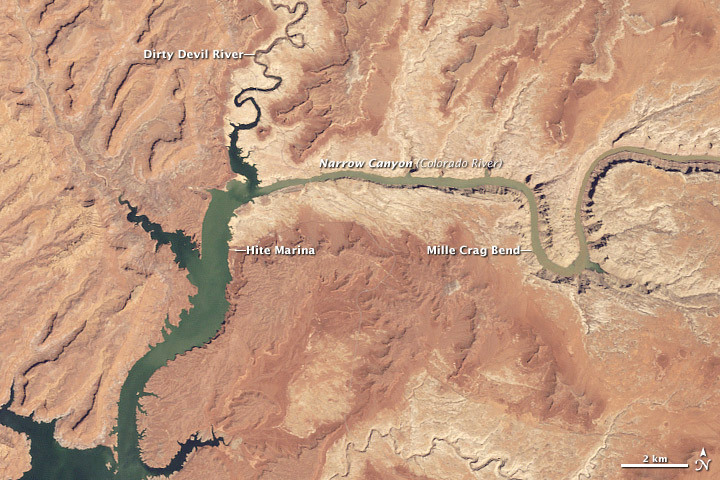 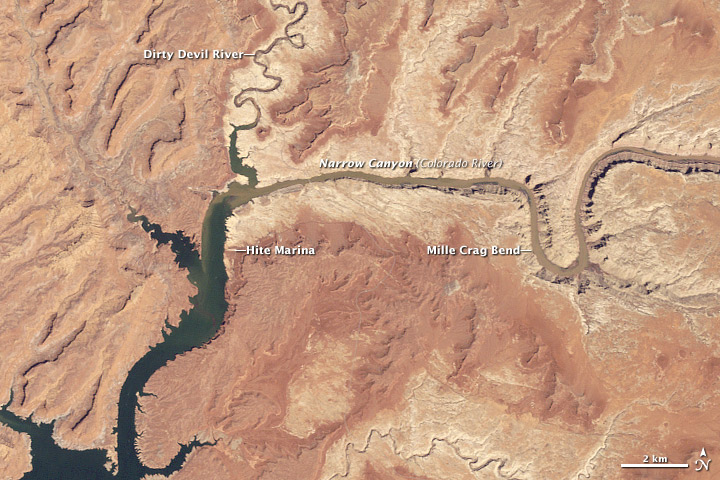 Lake Powell, a key reservoir in the water supply system for the American Southwest, has been low for more than a decade. Drained by severe drought and by increasing human and agricultural consumption, water levels have mostly been declining since the late 1990s, with a few exceptions.

The Thematic Mapper on the Landsat 5 satellite captured these natural-color views of the northeastern edge of Lake Powell on August 8, 2011 (top) and August 6, 2010, around the annual peaks in water levels. The submerged areas are wider in 2011, most noticeably around Mille Crag Bend, in Narrow Canyon, and where the lake widens (lower left corner). If you look closely, several points and peninsulas along the shoreline in 2010 became islands or were completely under water by August 2011.

During the winter of 2010-11, heavy snows blanketed the Rocky Mountains, source of much of the water in the Colorado River basin and Lake Powell. After a slow start to the melt season, runoff from high elevations in Colorado, Utah, New Mexico, and Wyoming surged through long-depleted regional waterways. Cool spring and summer temperatures, as well as higher-than-usual rainfall totals, increased the bounty.

In a May 2011 report from the U.S. Bureau of Reclamation, forecasters projected April through July inflow to be 145 percent of the 30-year average, double the flow for most of the past decade. They predicted the maximum elevation of the lake to reach 3,656 feet above sea level in summer, about 44 feet below full.

The inflow from April through July turned out to be 162 percent of the long-term average. As of July 28, the surface of Lake Powell had risen to 3660.79 feet, up from 3609.7 feet on April 9. The last time Lake Powell’s reservoir elevation was at this level was in October 2001. The data plot above shows the amount of water stored in the lake and the inflow for the past two years.

Total flow into the lake in July was 4.33 million acre feet; one acre-foot equals about 326,000 gallons. The inflow was 278 percent of the monthly average and made for the second wettest July since the completion of Glen Canyon Dam in 1963. Only 1995 had a wetter July, with 4.41 million acre feet. Water releases from the dam (downstream) were approximately 24,100 cubic feet per second, near the full capacity of the power plant.

By the end of July, water storage in Lake Powell was 18.60 million acre feet, or 76 percent of capacity. Nonetheless, after a decade of drought, that is still below the desired operating level for this time of year, the Bureau of Reclamation noted.

The change in fortune for Lake Powell and the rest of the Colorado River basin is much needed after nearly a decade of drought and below-average river flows. The low point came in spring 2005, when the deep, meandering reservoir dropped to just 33 percent of capacity. For the long view, see the Earth Observatory feature World of Change: Water Levels in Lake Powell, which documents changes in lake levels each spring since 1999.

Editor's note: Because of the angle of sunlight, the images above may cause an optical illusion known as relief inversion. Read more here.