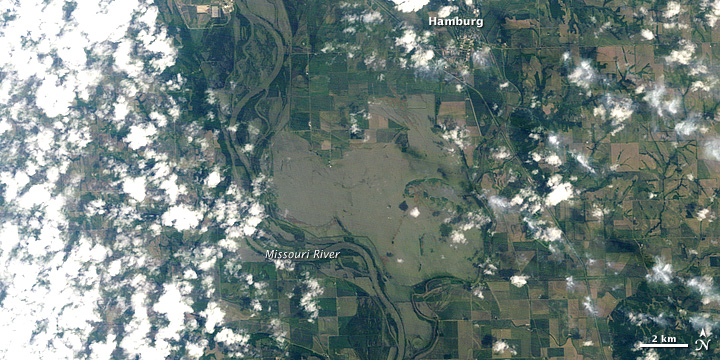 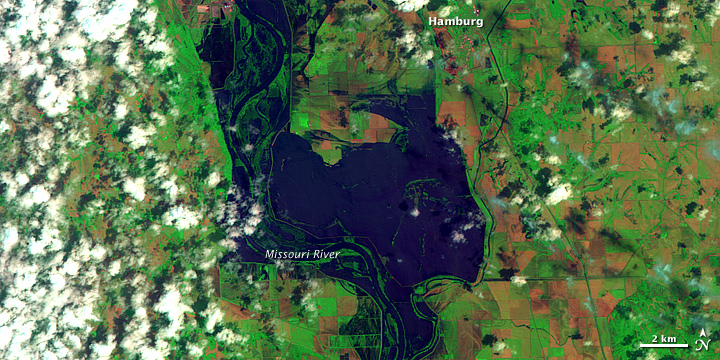 In mid-June 2011, the Missouri River spilled over its banks along the Nebraska-Iowa border, not far from Hamburg, Iowa. On June 14, the Thematic Mapper on the Landsat 5 satellite acquired two views of the flood, one in natural color and the other in false color. Most of the flooding occurs east of the river valley, although floodplains west of the river also hold standing water.

The false-color image better distinguishes between water and land. Water is navy blue. Clouds vary in color from turquoise to nearly white. Depending on land cover, areas not underwater are green or burnt orange. In this image, the flooding is discernible over a larger area than in the natural-color image.

On June 20, 2011, the Advanced Hydrological Prediction Service (AHPS) of the U.S. National Weather Service reported flooding on the Missouri River at the gauges nearest this area. To the northwest, the Missouri River experienced moderate flooding at Nebraska City. To the southeast, the river experienced major flooding at Brownville, Nebraska. On June 19, 2011, the AHPS reported, the Missouri crested slightly above the record level set for Brownville in 1993. The record level was 44.3 feet (13.5 meters), and on June 19, the river briefly reached 44.62 feet (13.60 meters) before receding slightly.