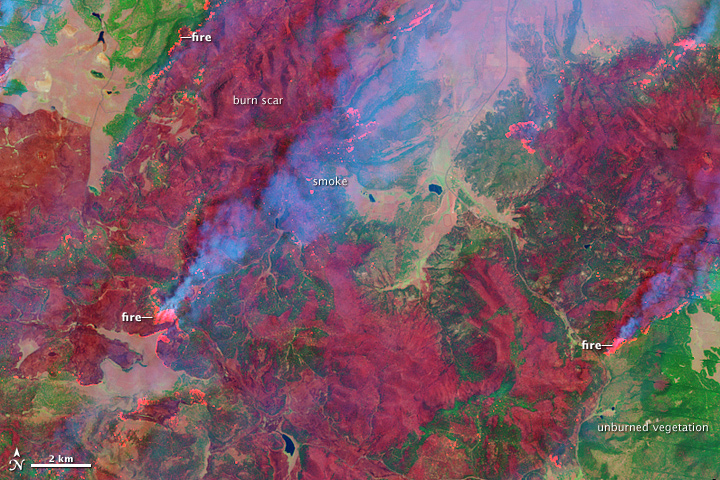 An oasis of green in the desert southwest, the Apache National Forest covers the mountains due east of Phoenix and spills across the border with New Mexico. In late May and early June 2011, the island of forest became fuel for one of the largest fires in Arizona history, the Wallow Fire. This image, taken by the Landsat-7 satellite on June 7, shows the northern edge of the fire.

The image was made with infrared light. Bright red spots are actively burning areas, and darker red areas are freshly burned ground. Unburned forest and grassland is green, while sparsely planted earth or bare ground is pale pink. In many places, the fire has burned right to the edge of the forest. The image shows that the fire is intense: It has thoroughly burned the forest leaving few ribbons or patches of green in its wake.

As of June 8, the Wallow Fire had burned 389,000 acres (608 square miles) and was completely uncontained. Several communities have been evacuated, and the Apache National Forest is closed to the public. The Wallow Fire started on May 29, 2011.