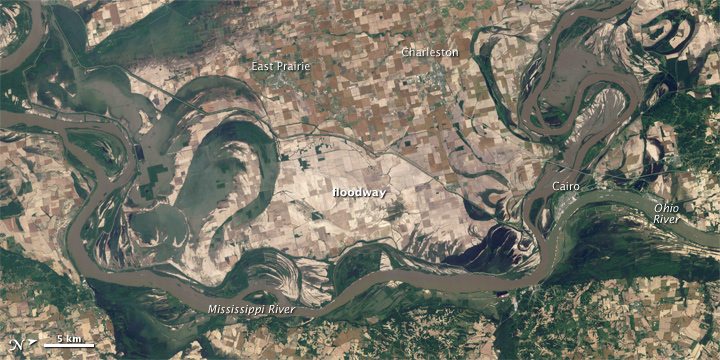 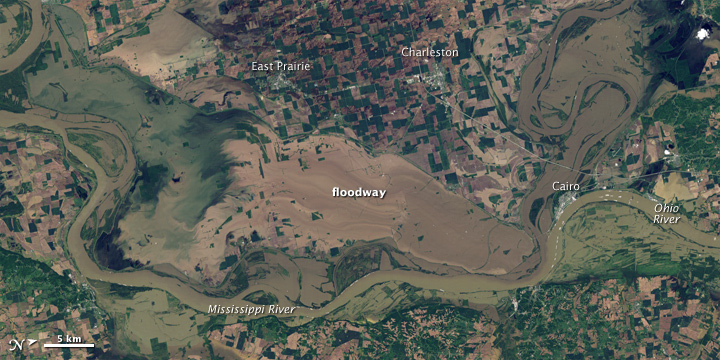 On May 2, 2011, to relieve pressure from record flooding along the Mississippi River, the U.S. Army Corps of Engineers breached a levee near Cairo, Illinois. As a result, water inundated the Birds Point-New Madrid Floodway. Water lingered in the floodway through May, visible in an astronaut photo on May 12, and a satellite image on May 20. By early June, however, flood waters had receded.

The Thematic Mapper on the Landsat 5 satellite captured these natural-color images on June 4, 2011 (top), and May 3, 2011 (bottom). The images are rotated, and north is at right. In early May, muddy water fills the floodway. Water has also spilled onto other floodplains along the Ohio and Mississippi Rivers. In early June, much of the floodway has dried out, and croplands form a checkerboard pattern west of the Mississippi River.

In breaching three sections of the levee near Cairo on May 2, the Army Corps operated the Birds Point-New Madrid Floodway for the first time since 1937. The floodway is enclosed by setback levees designed to confine the water to the designated area. The Birds Point-New Madrid Floodway is one of a series of floodways along the Mississippi River aimed at flood mitigation.