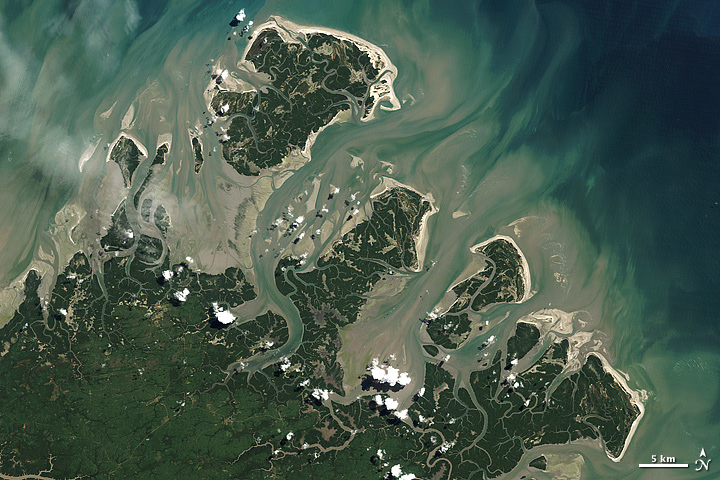 They are narrow strips of sand, often spits or sandbars that grew into full-blown, vegetated islands. They stretch from a few hundred meters to several kilometers wide. They run parallel to the coast, facing the sea and bearing the brunt of waves and wind, while protecting the lagoons and bays and coastal wetlands behind them. And they move almost constantly, shaped and re-shaped by currents, tides, winds, and man.

Barrier islands are found along the edge of every continent except Antarctica, and in 2011 scientists and naturalists are still finding new ones. In fact, a new survey by Matthew Stutz of Meredith College and Orrin Pilkey of Duke University identified 657 more barrier islands than were previously thought to exist.

The Thematic Mapper on the Landsat 5 satellite captured this 2006 image of previously unrecognized barrier islands along the northeast coast of Brazil, midway between the mouth of the Amazon River and the coastal city of São Luís. According to the research team, Brazil has the world’s longest continuous chain of barrier islands—54 in total, extending more than 571 kilometers (355 miles) along the Atlantic coast.

The researchers used high-resolution satellite images to supplement traditional survey sources such as topographic maps and navigational charts. They counted 2,149 barrier islands worldwide, up from the 1,492 islands that they had identified in a 2001 survey.

“It's not that 657 islands appeared overnight,” said Stutz, in explaining the new total. “We simply did a more thorough job of counting what was already out there.” When Stutz and Pilkey conducted the last major survey, sparse and low-resolution imagery left many islands hidden by coastal features—such as mangroves along the coasts of Brazil, Madagascar, and Australia—that encroached so close to the waterline as to hide the sand beaches.

Other beaches were not previously recognized because coastal researchers did not believe barrier islands could form in regions with seasonal tides higher than 4 meters. Along the Brazilian coast in the image above, spring tides can rise and fall as much as 7 meters.