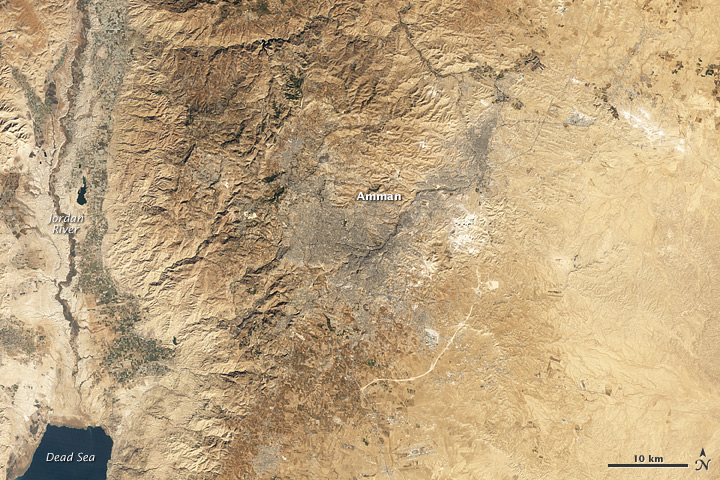 About 9,000 years ago, a settlement was founded in an area of rolling hills between the fertile Jordan River Valley to the west and desert in the east. Along the banks of the Wadi Amman and its tributaries, this settlement has alternately flourished and declined, but has remained continuously inhabited to the present day.

NASA’s Landsat 5 satellite captured this natural-color image of Amman, Jordan, on December 3, 2010. The city forms a rough V shape of gray. West of the city, the terrain is more rugged, with small valleys extending toward the Jordan River. Part of the Dead Sea appears southwest of Amman, and agricultural fields in the Jordan River Valley appear west of town. East of the city, the land is flatter.

The uneven terrain in this region is composed of sedimentary rocks—chalk, chert, limestone, and marl—likely deposited when this slab of Earth's crust was underwater. The rocks in this region date from the Cenomanian Stage to the Paleocene Epoch, or roughly 95 million to 55 million years ago.

Limestone and chert are good for holding water in aquifers, making them a valuable resource to the country. Less than 5 percent of Jordan’s land is arable, and just over 1 percent supports permanent crops. Fresh water is scarce, and drought and desertification pose perennial threats. A relatively moist area compared the deserts of eastern Jordan, Amman is home to more than 1 million of the country’s estimated 6 million residents.